Convened by the National Research Council in response to a request from Congress (P.L. 110-161), America’s Climate Choices is a suite of five coordinated activities designed to study the serious and sweeping issues associated with global climate change, including the science and technology challenges involved, and to provide advice on the most effective steps and most promising strategies that can be taken to respond.

Advancing the Science of Climate Change

Adapting to the Impacts of Climate Change

“The polar regions are experiencing rapid changes in climate. These changes are causing observable ecological impacts of various types and degrees of severity at all ecosystem levels, including society. Even larger changes and more significant impacts are anticipated. As species respond to changing environments over time, their interactions with the physical world and other organisms can also change. This chain of interactions can trigger cascades of impacts throughout entire ecosystems. Evaluating the interrelated physical, chemical, biological, and societal components of polar ecosystems is essential to understanding their vulnerability and resilience to climate forcing.”

“New York State’s extensive ocean coastline has places that we know, that we remember and that have shaped us in some way. The state’s coastline includes many notable locations—Montauk Point, Coney Island, Robert Moses State Park, Battery Park and the Hudson River’s shores from New York City to the federal dam at Troy. More than 60 percent of New Yorkers live in homes on or near these waterfront areas. Each shoreline area is unique and part of the essence of New York. But these places will change as sea level rises, and the differences will become more obvious as the sea continues to rise to levels never experienced by humans. A result of the world’s changing climate, a rising sea will alter more than just the coastline. The entire state will feel the effects as residents and a significant amount of the landscape are affected. These areas are diverse and interconnected and share New York’s rich agriculture, commercial, economic and environmental history and resources.

“The communities along New York State’s coastline, including their structures, their residents, their environment and the surrounding natural resources, are products of decisions made over the course of many years. These decisions shaped decades of investment, development and conservation. While the extent of the impacts to coastal communities from a rising sea are not fully known, even the most conservative projections make clear that there will be dramatic changes in this century. Thus, how coastal communities and our state address this collective challenge is important to today’s decision makers. The responses needed to protect communities from the threat posed by sea level rise will take time, and now that the challenges are better understood, government is obligated to protect its citizens while there is time to do so effectively. New York must focus on the smart use of limited resources to address the impacts associated with sea level rise.

The Mississippi River and Tributaries Project:Controlling the Flow – a description of the operation of the lower Mississippi flood control plan. (accessed May 8, 2011)

This is the Army Corps of Engineers explanation of the Mississippi River flood control system and how it would be used to control a flood. It details the the use of the floodways and the river flow levels that will trigger their use. The key information for this flood is that up to 1,500,000 cubic feet per second (CFS) can be diverted into the Morganza/Achafalaya floodway. At the other end, 1,200,000 will flow out at through the Achafalaya River at Morgan City and 300,000 through the Wax Lake outlet of the Achafalaya river.

At least as to river heights, the Flood of 2011 may be second or third largest Mississippi River Flood in modern times. Total volume of the flood is hard to compare because the river and the tributaries are more constrained than in the past. Water in a leveed river will be much higher than in a river without levees where it can spread out horizontally.

Satellite images of the floods

“The Mississippi River is rising, the Army Corps of Engineers has just blown a controversial floodway levee north of Cairo, Ill., and the surge is coming downstream.

New Orleans will be safe, however, not because of its high river levees, which could be challenged if 2 million cubic feet per second swirl by at 8 miles an hour, chewing on the banks, even with a few feet of freeboard. Rather, the city is safe because of another floodway to the west, the Atchafalaya, that can take half the Mississippi’s highest flows and funnel them safely to the Gulf.

We also are safe because we have the rights to use this floodway, free and clear. This was not always the case. In fact, it became the case only after a long fight that ran for nearly 20 years over the Atchafalaya basin…

Read the rest of this editorial by Professor Oliver Houck of the Tulane Law School.

These pictures were taken on the levee at the intersection River Road and Stadium Drive in Baton Rouge. The normal river channel is out near the barges. Flood stage (where the river would top the banks if there was no levee) is 35 feet. 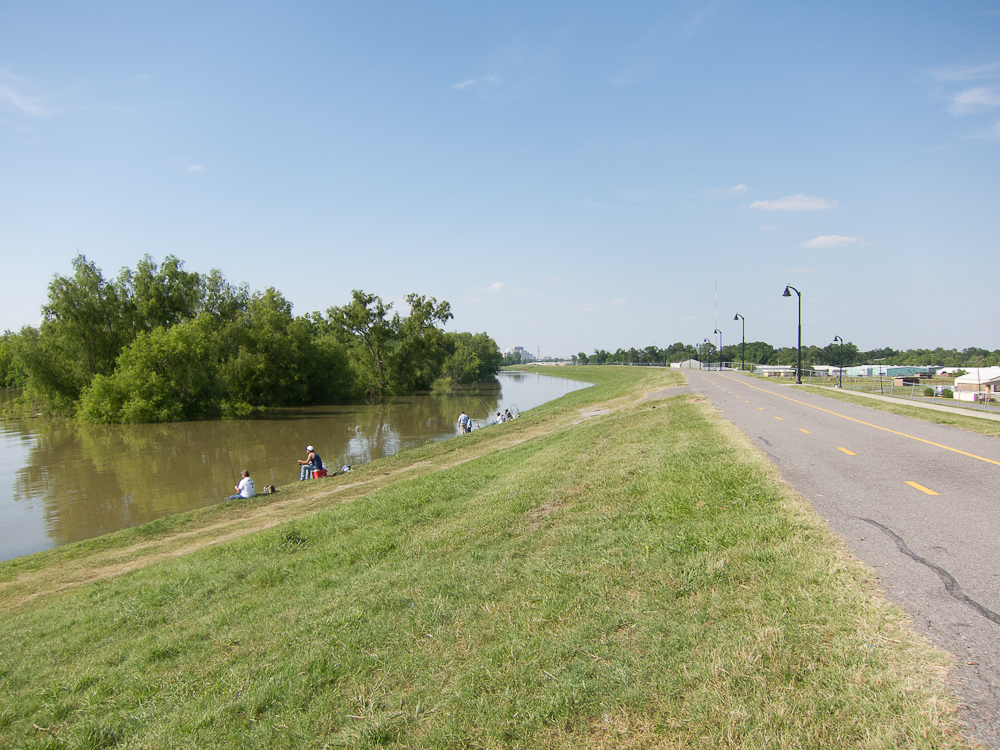 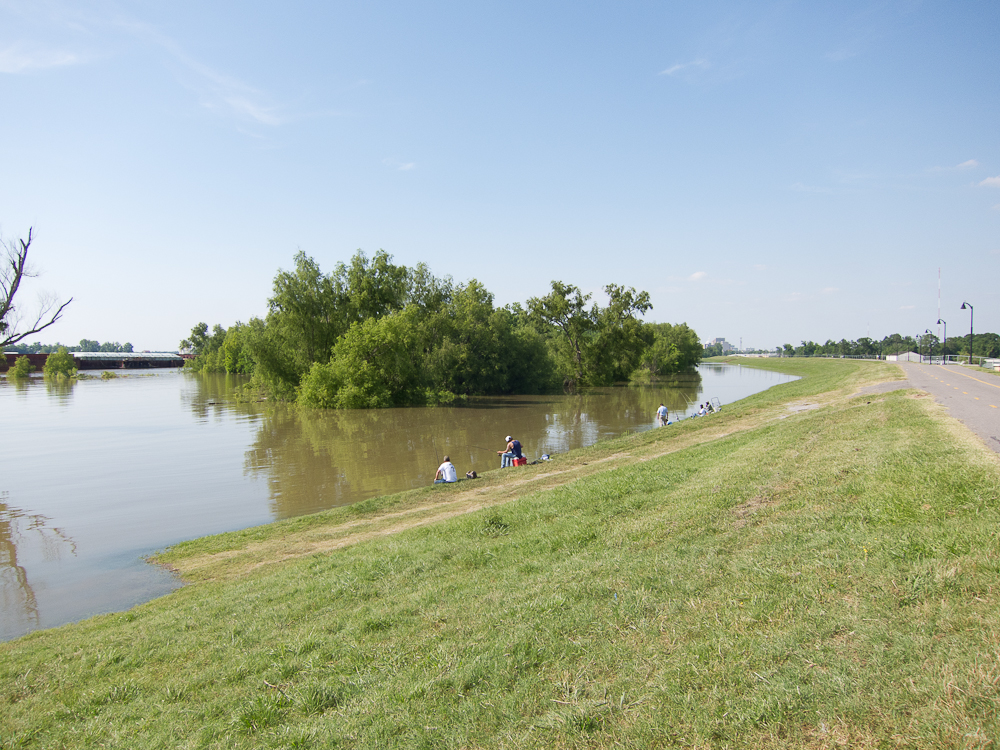 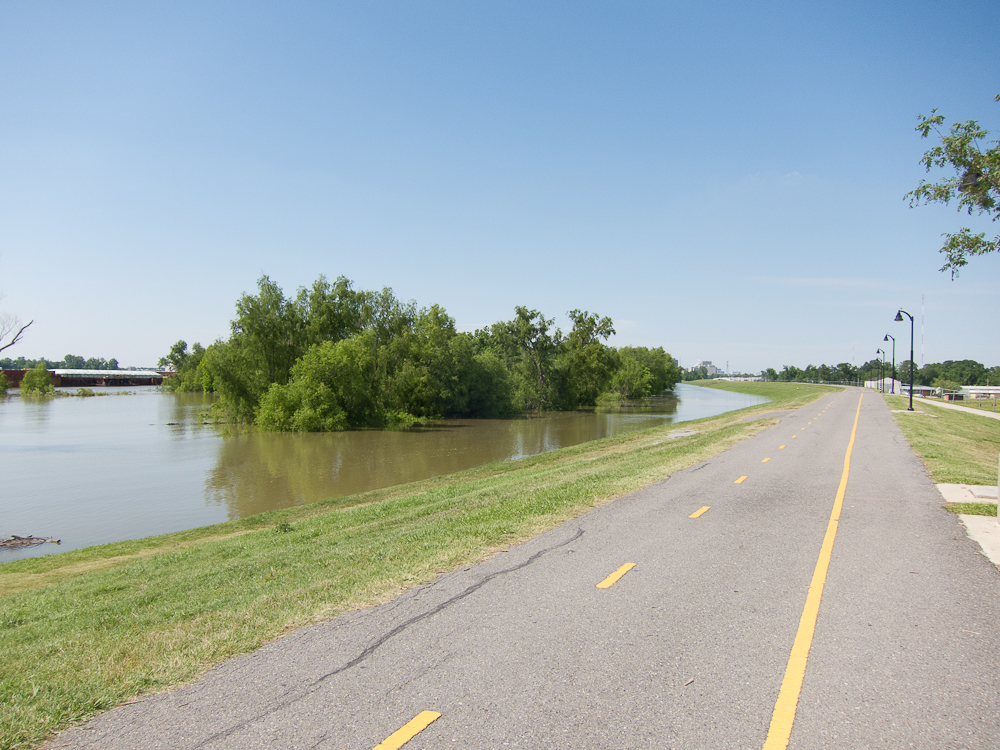 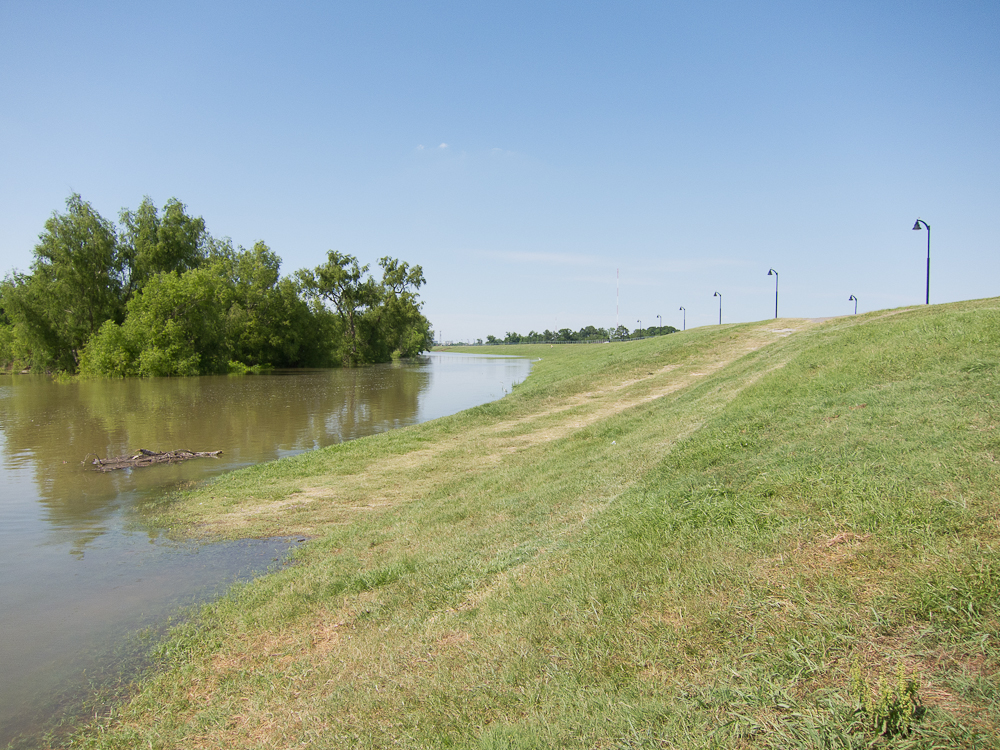 This study of the impact of relative sea level rise on the National Flood Insurance Program was authorized by Congress and signed into law on November 3, 1989. The requirements of this study as specified by the legislation are as follows:

The Director of the Federal Emergency Management Agency shall conduct a study to determine the impact of relative sea level rise on the flood insurance rate maps. This study shall also project the economic losses associated with estimated sea level rise and aggregate such data for the United States as a whole and by region1. The Director shall report the results of this study to the Congress not later than one year after the date of enactment of this Act. Funds for such study shall be made available from amounts appropriated under section 1376(c) of the National Flood Insurance Act of 1968.

“Three hundred miles up the Mississippi River from its mouth—many parishes above New Orleans and well north of Baton Rouge—a navigation lock in the Mississippi’s right bank allows ships to drop out of the river. In evident defiance of nature, they descend as much as thirty-three feet, then go off to the west or south. This, to say the least, bespeaks a rare relationship between a river and adjacent terrain—any river, anywhere, let alone the third-ranking river on earth.”

Missouri’s TRO against the Corps to prevent the blowing of the levee on the Mississippi in May 2011: complaint; answer; and district court opinion (upheld by the circuit court – Missouri v. U.S. Army Corps of Engineers, 11-01937, U.S. Court of Appeals for the Eighth Circuit (St. Louis)., and review was denined by the Supreme Court.)

This same issue was litigated when the Corps modified the levee system at this point, and Missouri tried to block the work based on failing to consider earthquakes under the EIS:

Interesting that almost none of the media pays attention to the legal situation of folks in the Missouri floodway – they originally got the land with easements on it, or sold an easement to the feds later. The original purchasers got the land very cheaply, precisely because of the easements. With time, everyone forgets that every day they are on land is a gift, not an entitlement. Then when the floodway is used, congress comes in and bails them out as if they owned the land free and clear.

The worse problem is playing out over the decision to open the Morganza spillway in Louisiana. This has not been opened since 1973, and it is full of people who forgot that is a spillway. This then inhibits the corps in opening the spillway, which then increases the belief that it will never be opened. The Corps should be opening Morganza right now, rather than seeing how much stress the downstream levees can take. For example, the major prison in LA, Angola, is on a bend in the river. The projected crest is now higher than the levee at Angola, and the state is starting the process of evacuating a max security prison with more than 5,000 prisoners. That would not be necessary if Morganza was open. Baton Rouge is facing a crest 4 feet about the previous record, which may put some water over the levee on the Port Allen (west side) of the river, since those levees are a little lower. While 47.5 feet is below the level of the levees, it is enough to drive a lot of water under the levee. You can already see the water level in the drainage ditches near the levee going up, and sand boils are carrying water several thousand feet from the river into neighborhoods. If things are not as the Corps thinks they are with the levees, and a boil blows out like in Cairo, you could get a lot of flooding fast. The conventional wisdom in LA is that Mississippi river levees do not break, but that is only true until it isn’t. (They are built and maintained better than hurricane levees, but the Corps knows a lot less about the geology in south LA than it thinks.)

So, should we let people live and farm in spillways at all? My vote would be to make them wilderness, and to open them pretty regularly to keep the charged with silt and filled with wetlands.

This post will be updated as more information is available.

“On the morning of August 29, 2005, Hurricane Katrina struck southeast Louisiana and triggered what would become one of the worst disasters ever to befall an American city. The devastation was so extensive, and the residual risk looms so ominous, that, more than a year later, the future of New Orleans remains clouded. The members of the ASCE Hurricane Katrina External Review Panel have conducted an in-depth review of the comprehensive work of the United States Army Corps of Engineers (USACE) Interagency Performance Evaluation Taskforce (IPET) to better understand this tragedy and prevent similar disasters from happening again. The report, The New Orleans Hurricane Protection Systems: What Went Wrong and Why, focuses on the direct physical causes and contributing factors to the hurricane protection system failures. It was developed not to repeat the IPET information, but to interpret the broader significance of the findings. Written for both technical and general audiences, the report gleans valuable information related to the science and technology of hurricane flood protection as well as an overview of what caused the disaster. A fascinating read, “The New Orleans Hurricane Protection Systems: What Went Wrong and Why” offers hope for not just the future of New Orleans, but for all other hurricane and flood-prone areas of the country.”