Air France General Counsel Lionel Bros, who earned his LLM from LSU Law in 1997, returned to his alma mater for a two-day visit on March 9-10, during which he interviewed current LLM students who are vying for an internship with the global airline in New York City following their graduation later this spring. 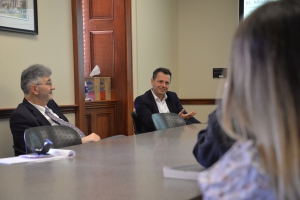 “It’s been a joy to be back at the Law Center and to meet the students, and just walk around campus and remember some of the great experiences I had here 25 years ago,” said Bros, a Marseille, France, native and Aix-Marseille University graduate who holds master’s degrees in law, international trade, business law, and insurance law.

Traveling with Bros to LSU Law was Counsel for Air France USA Gregory Kozlowski. LLM students interviewed with Bros and Kozlowski and took a written test for the Air France internship, which is being made available through a tripartite agreement between LSU Law, Aix-Marseille University, and Air France.

On March 10, Bros also made a special presentation to LLM and International Law Society students at the Law Center, during which he talked about his career path and provided an overview of the in-house legal work that’s done at Air France.

On March 2, 2022, Professor Jean-François Gaudreault-DesBiens, former Dean of the Faculty of Law and presently Vice Rector of the University of Montreal, presented in French on Legal and Cultural Convergences, Canada, France and Louisiana. The lecture inspired a rich discussion. This was the first interdisciplinary Senghor Chair Lecture given at LSU Law, organized jointly by the Center of Civil Law Studies and the Center of French and Francophone Studies. LSU is the only U.S. holder of one of 21 Senghor Chairs of Francophone Studies. Click here to access the video recording of the lecture. 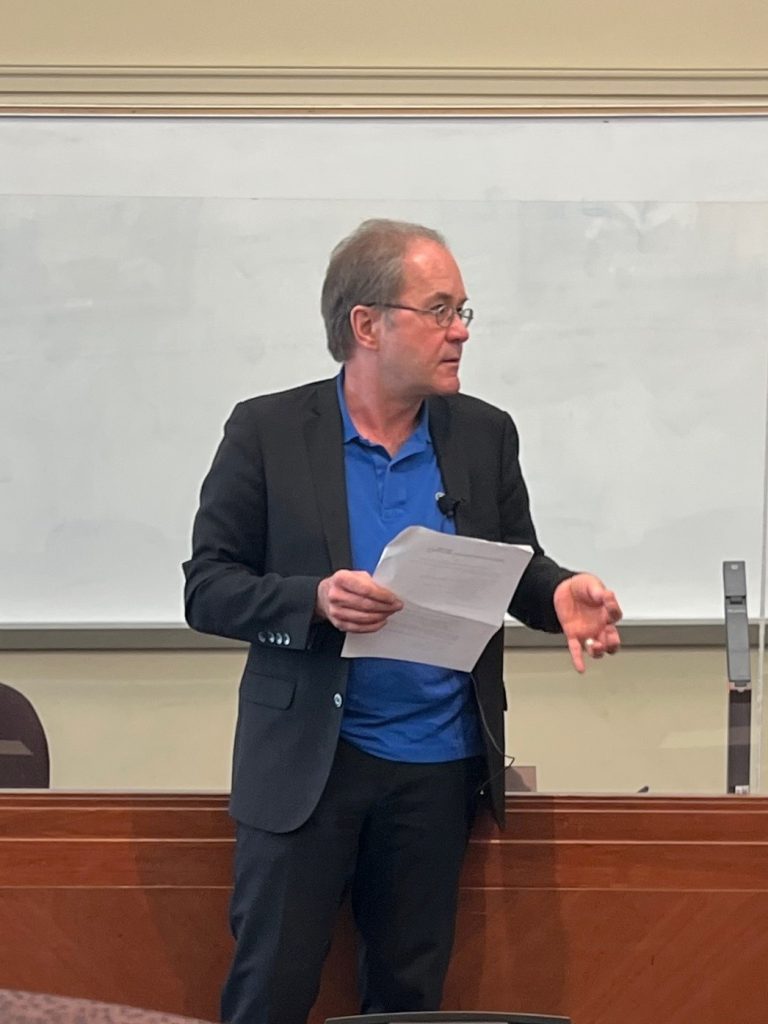 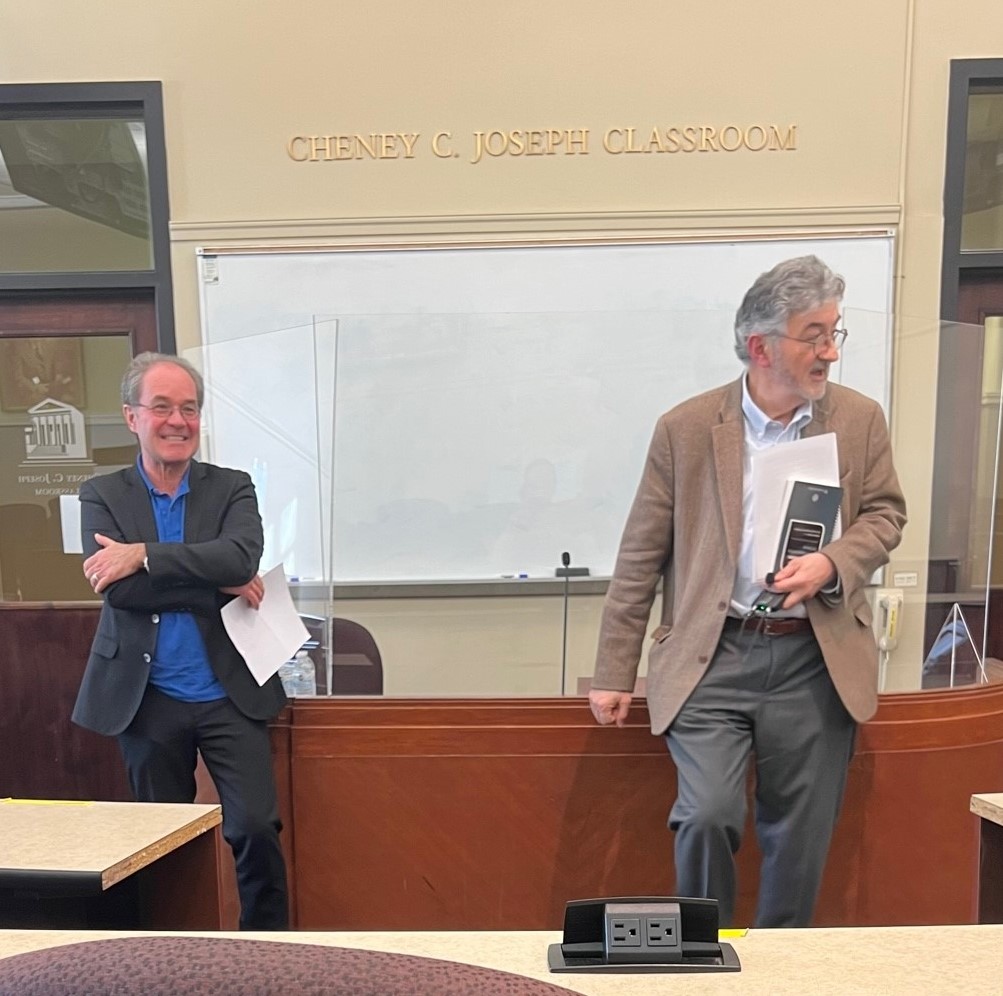 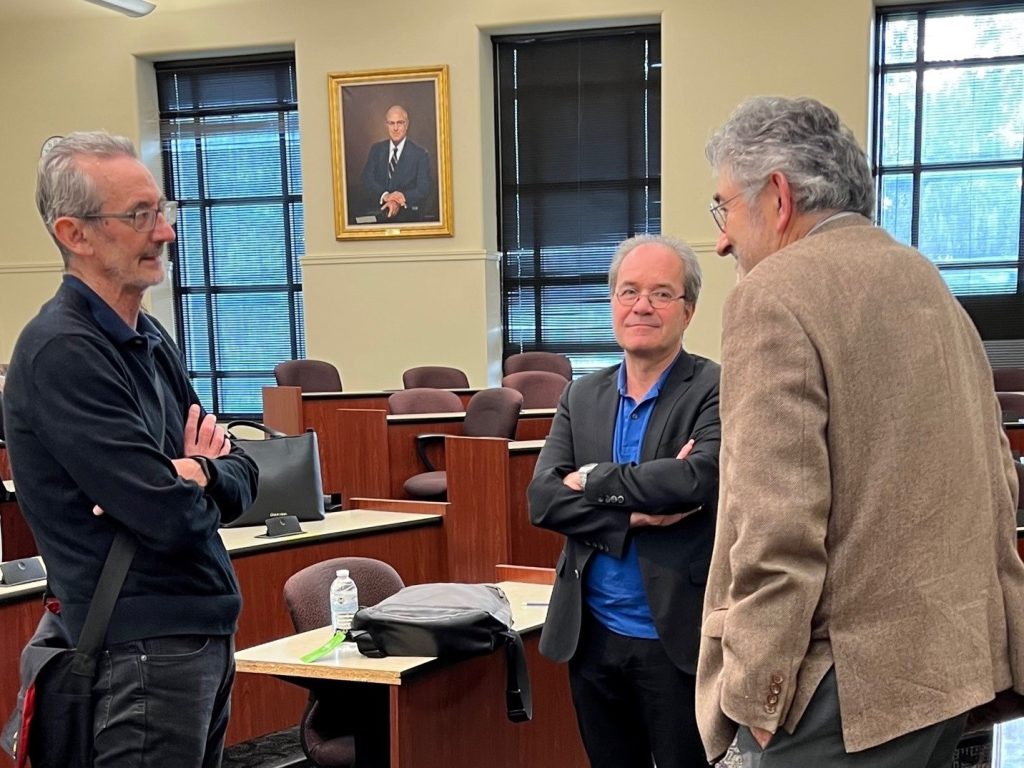 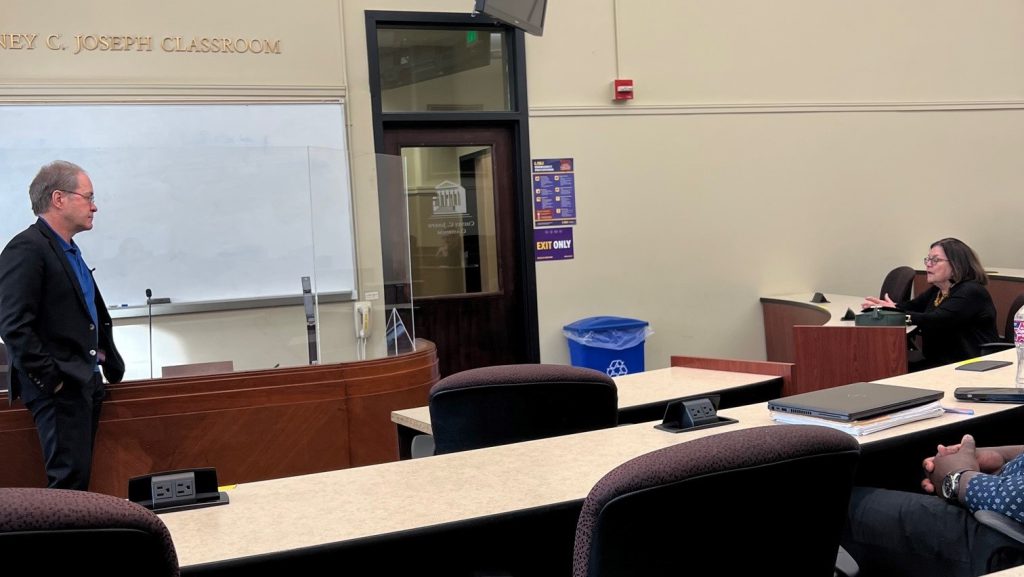 The Center of Civil Law Studies

The Center of French and Francophone Studies

Invite you to attend a

Vice-Rector of Strategic Planning and Communications 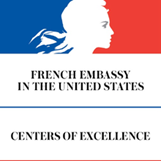 Juris Diversitas Conference on the Dark Side of the Law 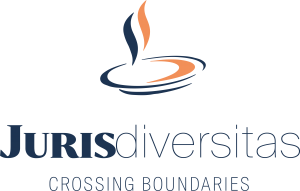 Professor Olivier Moréteau, President of Juris Diversitas, invites you to attend the 7th General Conference on “The Dark Side of the Law” organized online on June 9-11, 2021. Two other LSU Law faculty will also present: Prof. Emeritus John Baker and Prof. John Church. 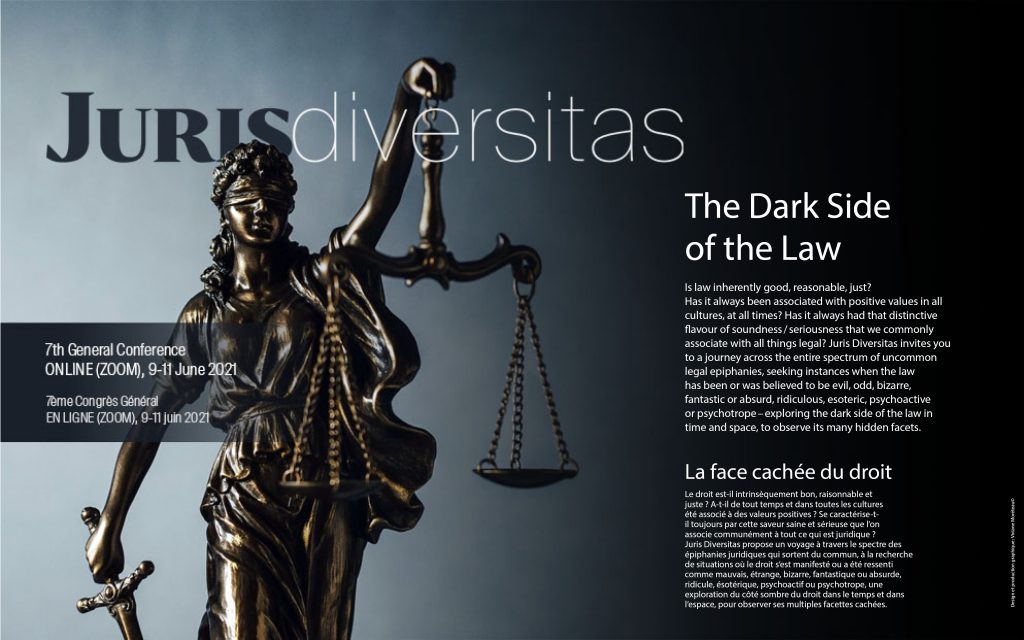 Participation is free for all Juris Diversitas Members in good standing. Dues are 50 Euros ($60) and 25 Euros ($30) for students. Click here to visit the Juris Diversitas webpage (and from there click on the Events or Membership tabs).

Translating the Louisiana Civil Code into Spanish: A Jurilinguistic Exercise

Co-sponsored by the Supreme Court of Louisiana Historical Society 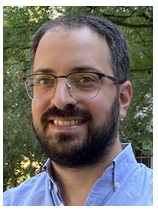 In celebration of Vernon Valentine Palmer’s fifty years of teaching at Tulane and the publication of his latest book, Tulane Law School and the Eason Weinmann Center for Comparative and International Law invite you to a live virtual conversation between comparative-law experts, Dean David Meyer, and the author. Click here to register. 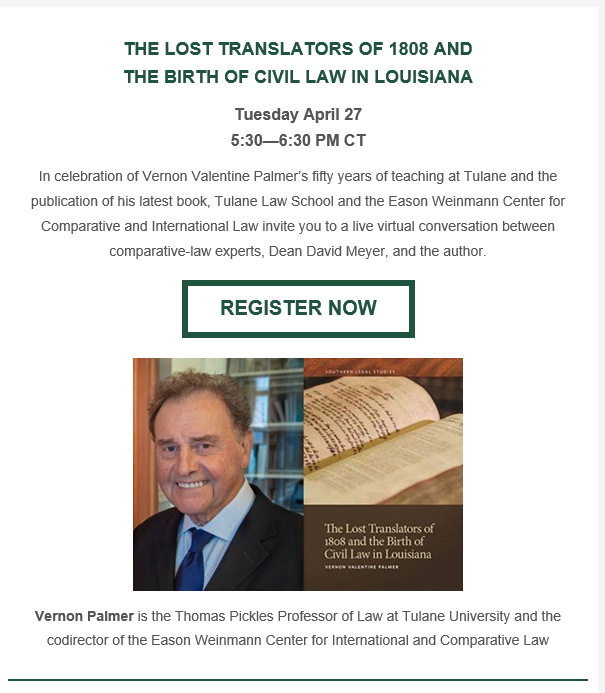 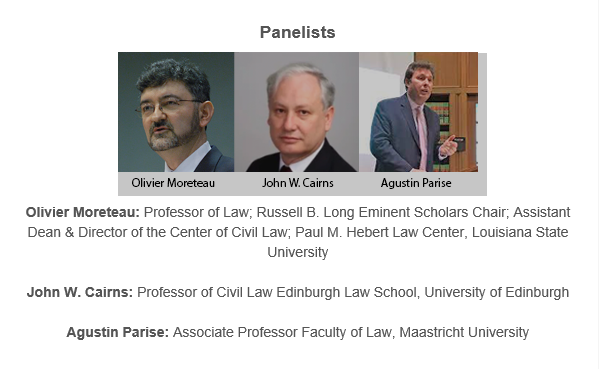 Posted in Civil Law, Events, Translation Projects | Comments Off on The Lost Translators of 1808 and the Birth of Civil Law in Louisiana

50th Anniversary of the Code of Commerce of Colombia 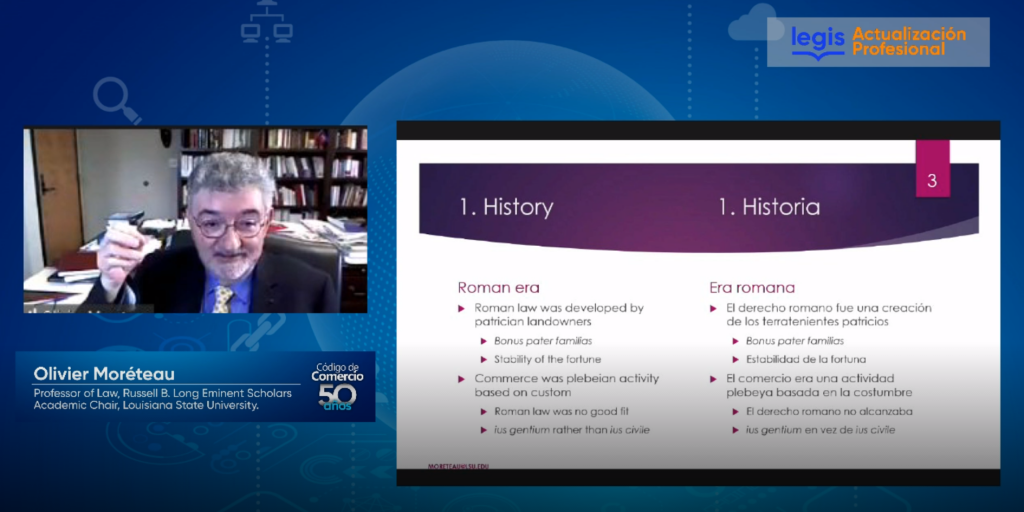 On March 25, 2021 Professor Olivier Moréteau was a guest speaker at an online international conference commemorating the 50th anniversary of the Commercial Code of Colombia. He was invited by Professor Francisco Reyes, who taught multiple times at LSU Law as a Visiting Professor and gave the 39th Tucker Lecture in the Civil Law in 2016.

Prof. Moréteau’s topic was The Place of Commercial Law in Civil Law and Common Law Jurisdictions: A Macro Comparative Perspective. He presented in English with simultaneous interpretation into Spanish.

View the Webinar on the French Influence on Louisiana Law

On March 24, 2021, LSU Professors Alain Levasseur and Olivier Moréteau, Tulane Professor Vernon Palmer, and Dan Stigall (U.S. Department of Justice and LSU alum) discussed the French linguistic and juridical influence on the legal system of Louisiana at a Zoom roundtable organized by the French Embassy to the United States and the French Consulate General in New Orleans. Click here to view the webinar (in French). 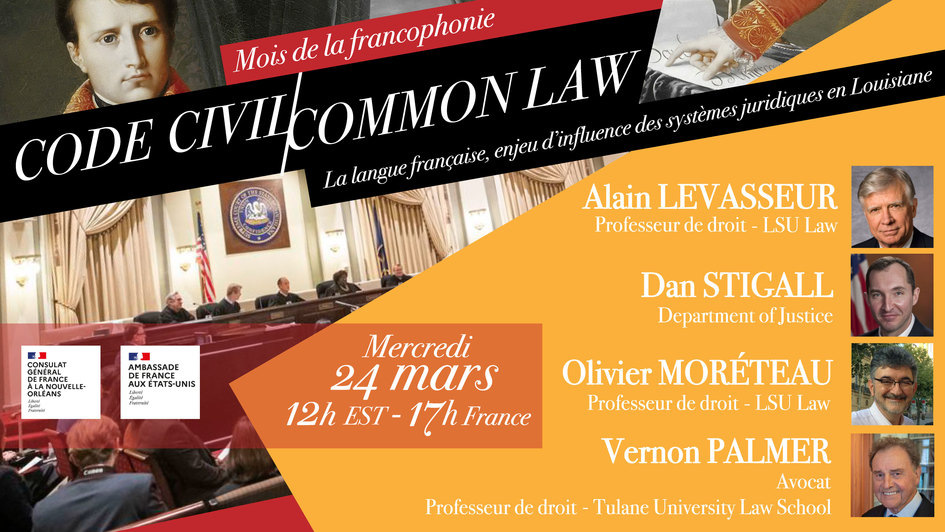 Posted in Civil Law, Lectures | Comments Off on View the Webinar on the French Influence on Louisiana Law

Six LL.M. candidates and one International Exchange student started at LSU Law in January 2021, braving the COVID restrictions after having secured the much-awaited visa to attend higher education in the United States. They joined one of the two LL.M. candidates who had started in fall 2020, the other one having abandoned after having contracted a severe form of COVID. They will be joined in August by other 2020-2021 candidates who elected to defer their start in the program to August 2021 and by the group of 2021-2022 candidates. The 2021-2022 admission campaign goes full swing and is soon to end. LSU Law expects to welcome a record high number of LL.M. candidates in 2021, a sign of vitality of the program despite the COVID sanitary crisis. 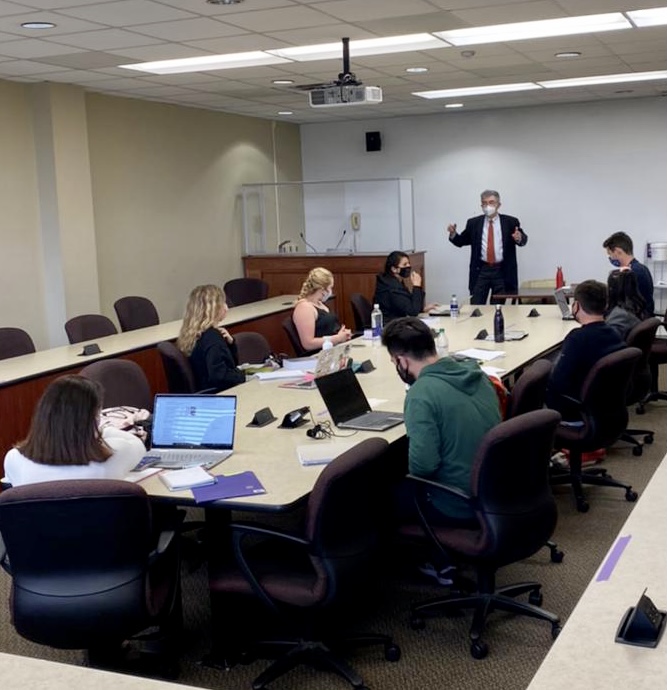 Webinar: The Intersection of the French Language and the Legal System of Louisiana

Join the Embassy of France in Washington, D.C. and the Consulate General of France in Louisiana on Zoom on Wednesday, March 24, 2021 for a panel discussion in French highlighting the use of the French language in Louisiana civil law. Louisiana is, to date, one of the few “laboratories” in which the civil law is written and spoken in another language.

Posted in Civil Law, Conferences, Events, French Consulate | Comments Off on Webinar: The Intersection of the French Language and the Legal System of Louisiana