A 1950 graduate of LSU Law, George began full-time teaching at the Law Center in 1952, and he remained on the faculty until his retirement in 1994. LSU Law’s George W. and Jean H. Pugh Institute for Justice was named after him and his wife. 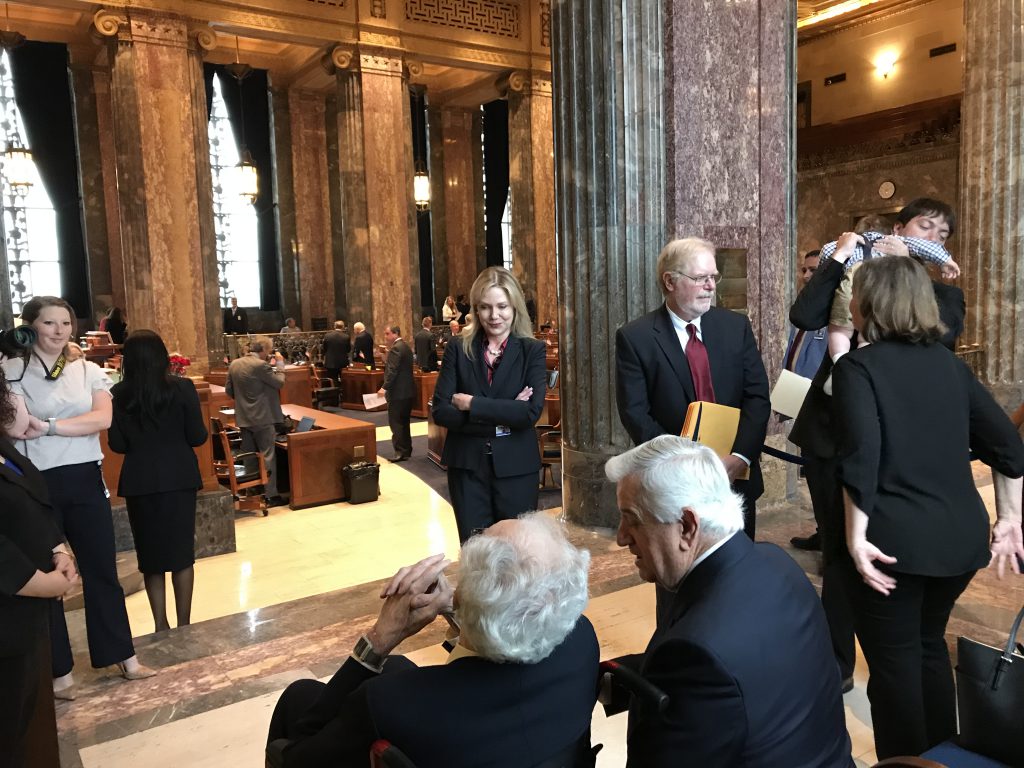 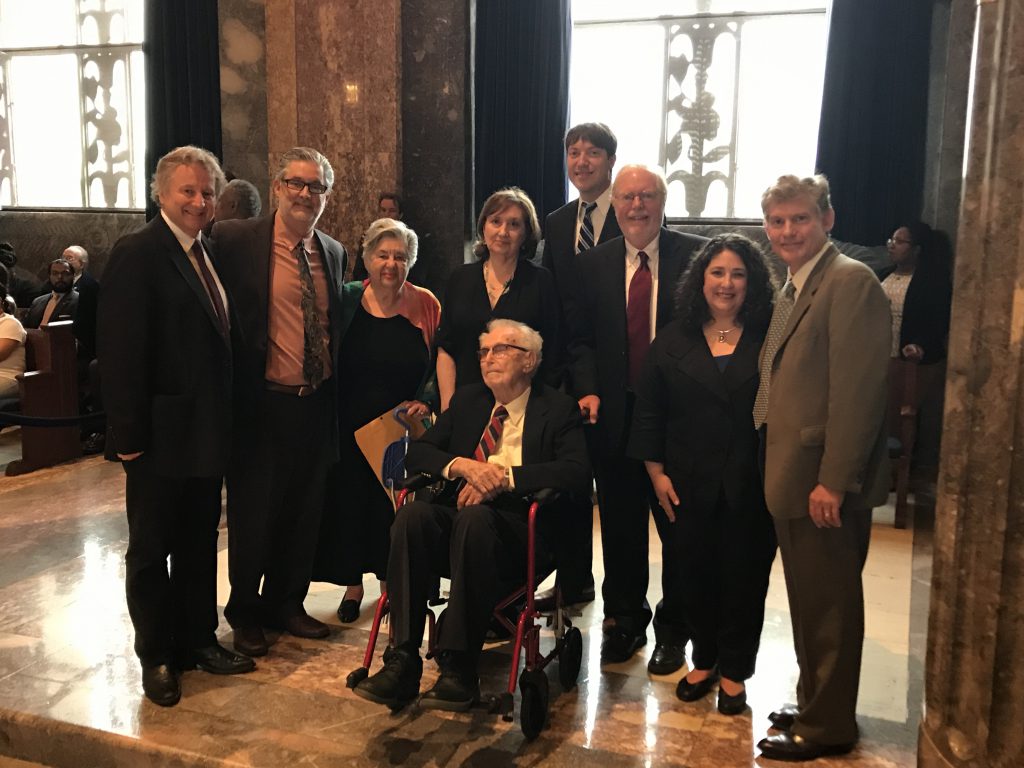 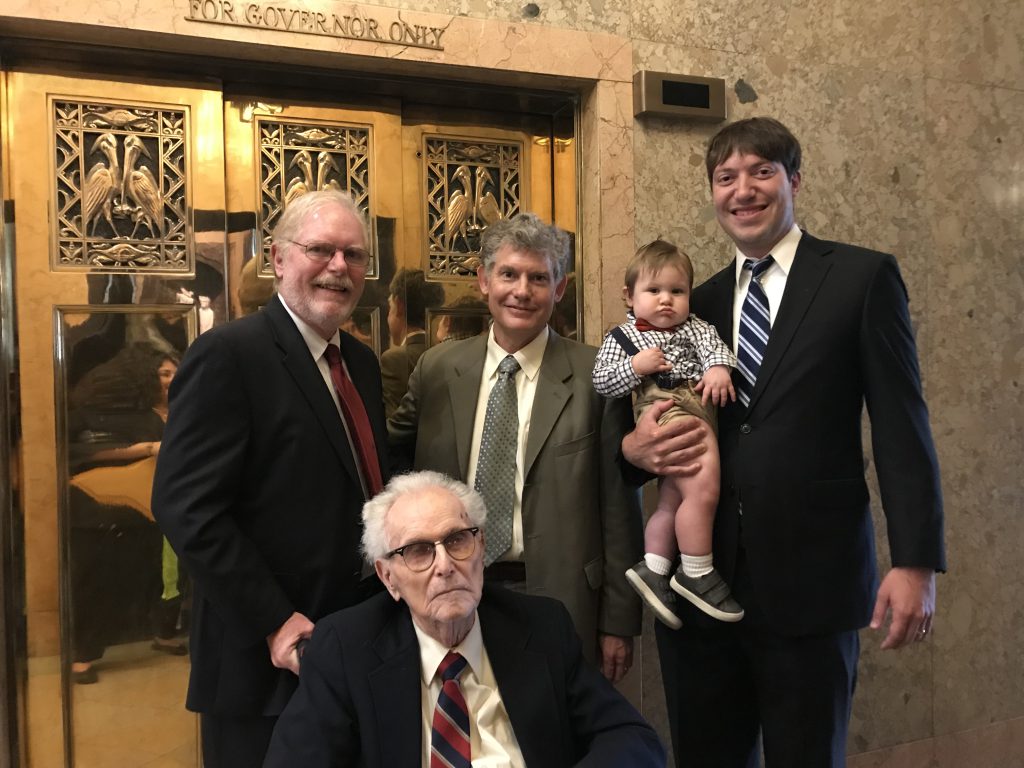 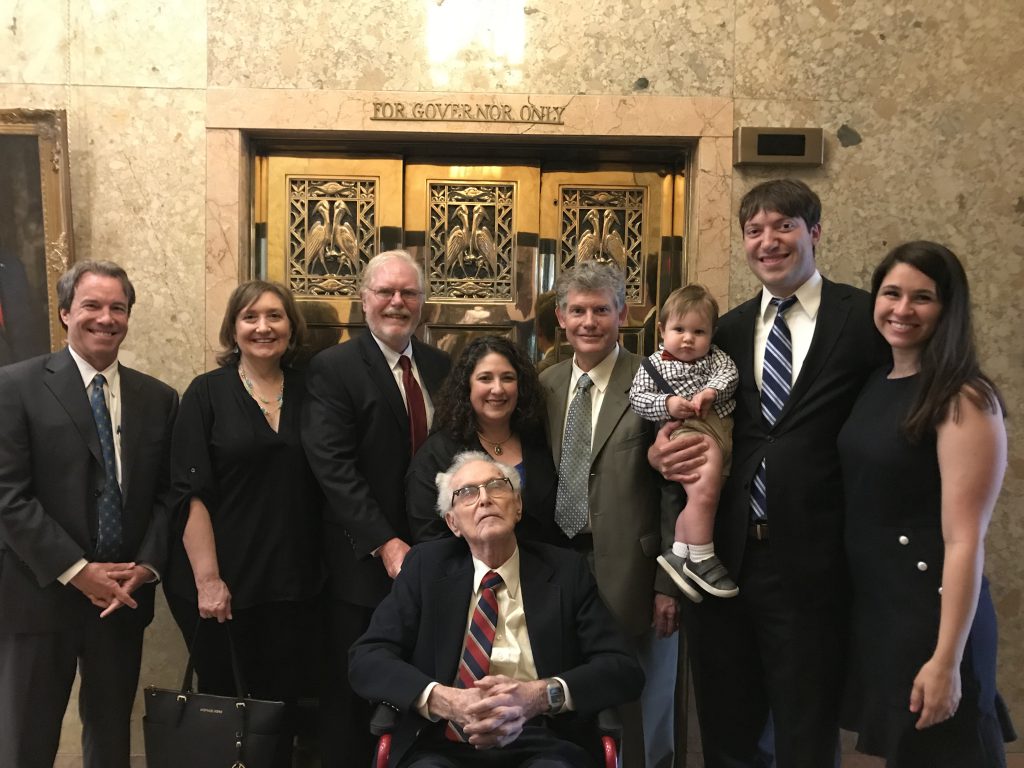 The full text of the Resolution is below:

To commend George W. Pugh, Professor of Law, upon his lengthy and distinguished career as an outstanding educator at the Paul M. Hebert Law Center at Louisiana State University as a prolific legal researcher and as the compiler of the Louisiana Code of Evidence.

WHEREAS, it is with great pride that the Legislature of Louisiana acknowledges the lifetime of legal expertise conveyed by the brilliant intellectual and legal scholar, George Willard Pugh; and

WHEREAS, a Julius B. Nachman Professor of Law at LSU, Professor Pugh remains a towering figure in the realm of Louisiana law; known as the “intellectual father” of the Louisiana Code of Evidence, his codification of the subject matter required gleaning evidentiary principles dispersed throughout constitutions, codes, statutes, and case law, and crafting those concepts into a comprehensive reference; and

WHEREAS, he was the coordinator and coreporter, along with fellow coreporters, who confected the Code of Evidence for the Louisiana State Law Institute, using the Federal Rules of Evidence as its model; it was enacted into state law in 1988; and

WHEREAS, the Louisiana Code of Evidence has proved to be an invaluable resource for judges, district attorneys, and other legal professionals; and

WHEREAS, he began his studies at LSU in 1942, nonetheless, George volunteered for military duty and was deployed to France during World War II; in 1946 at the age of twenty-one he returned to LSU, and after three semesters entered LSU Law School; and

WHEREAS, he would earn a Juris Doctor in 1950, however, during his last semester, he substituted for an ailing professor and taught the evidence course to his classmates; his teaching abilities were of an exceptional quality and noted by Dean Paul M. Hebert; and

WHEREAS, his law school counselor, Professor Harriet S. Daggett, encouraged him to attend her alma mater, Yale Law School, on scholarship; he obtained a Doctor of Juridical Science in 1952; his thesis on the history of sovereign immunity was published in the Louisiana Law Review; and he rejoined the LSU Law School faculty in the Fall of 1952 as an assistant professor; and

WHEREAS, these were exciting times at LSU Law School and George Pugh had the distinct privilege to be in the company of numerous titans of Louisiana law; and

WHEREAS, after his appointment to the Judicial Council and serving for two years as the state’s first Judicial Administrator for the Louisiana Supreme Court, he resumed his teaching position, became a full professor, and remained at LSU until 1994, having provided forty-three years of extraordinary instruction to nearly three generations of legal professionals; and

WHEREAS, during his tenure at LSU, Professor Pugh produced voluminous and influential writings in the areas of Evidence, Criminal Justice, Federal Jurisdiction and Procedure, and Comparative Law; and

WHEREAS, in the classroom, his Socratic method prodded novices to prepare thoroughly, to think logically and critically when called upon to summarize a case or defend a position, and to communicate succinctly as proficient attorneys-at-law; it was a “think on your feet” scenario, similar to the demands of litigation in court; there were the quick and the dead; and

WHEREAS, many graduates recall his penetrating interrogation in his law review seminar when authors were required to defend their articles before publication; and

WHEREAS, no matter how relentless and foreboding Professor Pugh may have appeared to his class, he was greatly admired for his command of evidence law, his reverence for “the facts”, and his enthusiasm for jurisprudence; and

WHEREAS, his former students also recall his compassion and availability; he often shared informal brown bag lunches with students which were peppered with lively discussions; and

WHEREAS, Professor Pugh often initiated stimulating conversations with his colleagues as well to encourage a closer examination of an issue and to propose broader alternatives; and

WHEREAS, his profound knowledge of the law led to service on the bench as a judge ad hoc for the Louisiana Court of Appeal, presiding over one thousand sixty cases and as a member of the Council of the Louisiana State Law Institute; and

WHEREAS, George Pugh was an active member of the Baton Rouge, the Louisiana, and the American Bar associations and chaired several select committees; he was also a member of American Law Institute; and

WHEREAS, his teaching abilities and scholarship garnered invitations to teach as a visiting professor at law schools in Virginia, Texas, Belgium, Greece, and France; and

WHEREAS, Professor Pugh was selected as one of six law professors chosen to coordinate special studies of judicial administration in twenty countries; and

WHEREAS his field research projects and scholastic pursuits took him abroad to France, South Africa, Vietnam, and the Philippines; and

WHEREAS, he received the “Hub” Cotton Faculty Excellence Award at LSU and an honorary doctorate of law from the University of Aix-Marseille III in France, named a Sterling Fellow at Yale Law School, and listed in Who’s Who in America; and

WHEREAS, George met the beautiful Jean Hemphill on a return train trip to Yale; they were married within a year; their partnership was one of love, romance, and abstract legal thought; an honors graduate from Vassar and an attorney in her own right, Jean was his confidante, his helpmate, and his eyes when his sight failed, and his collaborator for endless discussions on all manner of law; it was a marriage made in heaven that lasted sixty
years; and

WHEREAS, together they established the George W. and Jean H. Pugh Institute for Justice in 1998, to promote justice for individuals in the administration of criminal and civil justice systems in the state of Louisiana and elsewhere; she remained a strong proponent for criminal justice research until her death in 2012; and

WHEREAS, their union was blessed with four sons, William, George Jr. “Rusty”, David, and James; three sons became attorneys and the latter became an architect; and

WHEREAS, born on Bayou Lafourche near Napoleonville in 1925, and the son and grandson of physicians, George Pugh has always exhibited exceptional scholarship; and

WHEREAS, in 1950, Professor Pugh began his teaching career at LSU Law Center and retired, having taught approximately 4000 students; and

WHEREAS, upon his retirement in 1994, the Louisiana Law Review dedicated its January publication to Professor Pugh; he had been its editor, associate editor, and a longtime faculty editor of the review; and

WHEREAS, he is a dependable friend and consultant to trial and appellate judges who seek his counsel; and

WHEREAS, George W. Pugh is a legal theorist without par and one of Louisiana’s most influential legal scholars; his expertise reshaped Louisiana evidence law and his teaching has produced multiple generations of law professionals, attorneys, judges, and professors; and

WHEREAS, for George W. Pugh, the compilation of the Louisiana Code of Evidence was his passion; he has garnered the respect and praise of his peers, both nationally and internationally; he is admired by his former students and his legal fellows for his intellectual brilliance; and he is treasured as a mentor, colleague, and friend.

THEREFORE, BE IT RESOLVED that the Legislature of Louisiana does hereby commend George W. Pugh upon his distinguished career as a professor of law at Paul M. Hebert Law Center at LSU and does hereby  acknowledge his legacy of scholarship and his many contributions made for the betterment of the legal system of Louisiana.

Employee
View all posts by moreteau →
This entry was posted in Awards, Events. Bookmark the permalink.