Ms. Raheel Ahmed visits from the University of South Africa 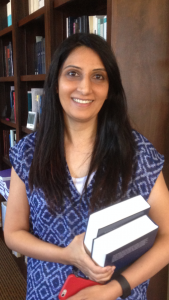 Ms. Raheel Ahmed, a Senior Lecturer at the Department of Private Law, University of South Africa, is presently visiting at the LSU Law Center (September 18 to October 7) as a guest of the Center of Civil Law Studies (CCLS), in order to further her doctoral research on “The explicit and implicit influence of reasonableness on the elements of delictual liability.”

Raheel Ahmed obtained her Bachelor of Laws Degree from the University of South Africa (UNISA) in 2003. After completing law school and articles of clerkship, she was admitted as an Attorney, Notary and Conveyancer of the High Court of South during 2005 and 2006. She practiced law in South Africa from 2006 to 2009. During 2008 she joined the Department of Private Law at UNISA as a lecturer and has since been involved in teaching law of third party compensation, law of delict, and law of damages. In 2012 she obtained her Master of Laws from UNISA and was promoted to Senior lecturer. She has authored 13 articles in accredited and non-accredited law journals in South Africa on the law of delict, damages and third party compensation. She has also delivered papers nationally and internationally. She is a lecturer for the Law Society of South Africa/ Legal Education and Development, UNISA distance school for legal Practice. She is also a consultant for the Law Society of South Africa/ Legal Education and Development for online course development. In 2014 she was awarded research funding (under the Academic Qualification Improvement Programme) from the University of South Africa for a period of three years in order to complete her doctoral studies. She is currently working on her doctoral thesis titled: “the explicit and implicit influence of reasonableness on the elements of delictual liability”.

Employee
View all posts by moreteau →
This entry was posted in Center of Civil Law Studies, Distinguished Foreign Visitors. Bookmark the permalink.