END_OF_DOCUMENT_TOKEN_TO_BE_REPLACED

The state does not have clear title to an estimated 286,467 acres of water bottoms, as private parties also claim ownership of these lands. These “dualclaimed” water bottoms cause several issues, including restricted public access, negative economic impacts, and potentially reduced revenue generating opportunities.

This article analyzes whether fisherman and hunters should have access to open water around privately owned coastal wetlands.

The Freeze Statute allows landowners to keep the royalties from oil and gas production on private land that has become state property through subsidence/sea level rise.

Coastal change is unlikely to require new law but properly dealing with its effects and planning our response to them will require more than just a good understanding of present law. Statutes rest on fundamental – but often unstated – societal assumptions favoring some outcomes and denying others. For example, Western societies presume land should remain in commerce and always be productive.

Virtually all of the major cases and controversies concerning water and/or coastal issues arising around the nation in recent years – property damage and land loss during hurricanes due to exploration and production (E & P) canals, increased expenses to levee boards from a subset of those same E & P canals, diversions affecting oyster beds, beach front lot owners objecting to beach restoration projects, Anthropogenic climate change causing increasing hurricane damage – were all resolved by applying existing law. Many of those laws are not just based upon Roman laws going back over 2,000 years; some are almost word-for-word copies of them.

Unfortunately, much of the general public either does not understand the basic principles of land use and tort or perhaps simply wishes for different outcomes despite existing (and well-settled) laws. Worse, there does not seem to be sufficient appreciation of the underlying geological factors driving some of the changes in and along our coasts, marshes, and swamps.

Law as an institution has never attempted to “control nature” per se but it most assuredly attempts to specify and control who gains and who loses - and why – when a river changes course, when new land forms at the beach, and when a dispute breaks out as to “what is a beach?” and “who owns it?”

A general overview of the major cases and an explanation of why they turned out as they did will better enable coastal planners to find – and stay within – more realistic limits of what can and cannot be accomplished within the framework of our existing laws. Moreover, if American society does determine a new direction in coastal programs is needed, a fuller understanding of current law will likely allow better choices to be consciously made. However, since law can only help illuminate the choices and assign the risks to various parties, ultimately geology  – not law – is the key to future decisions about our coastlines.

Louisiana Attorney General Jeff Landry discussion lawsuit and explaining that climate change is a hoax and that sea level is rising. – Facebook video on the AG Facebook page.

Coastal Louisiana, according to recent measurements,
has 4,572 miles of canals. This network can be divided into
five types; drainage and reclamation, trapping, logging,
petroleum and transportation. All of these were constructed
in response to a particular economic interest and provided
access to the resources in the marsh-swamp complex. These
channels, consequently, would not be a landscape feature
had it not been for the wetland resources.

END_OF_DOCUMENT_TOKEN_TO_BE_REPLACED

These reports are of contemporary interest because they remind us that oysters are not traditionally a major part of the Mississippi Delta Ecosystem. From p.77 of the First Biennial Report 1902-1904:

There are vast areas of soft mud bottoms, in your State, which may be made just as productive in oysters as is the ground of Messrs. McLaughlin & Lobrano and others, but not until vast quantities of sand and shells are deposited upon them, and they are effectively protected by locks and dams from fresh water floods, and this fresh water is regulated and utilized either in fattening the oyster or in protecting the beds from an excess of salt water after a severe “norther.” Harvey started as a typical weak August tropical storm that affected the Lesser Antilles and dissipated over the central Caribbean Sea. However, after re-forming over the Bay of Campeche, Harvey rapidly intensified into a category 4 hurricane (on the Saffir-Simpson Hurricane Wind Scale) before making landfall along the middle Texas coast. The storm then stalled, with its center over or near the Texas coast for four days, dropping historic amounts of rainfall of more than 60 inches over southeastern Texas. These rains caused catastrophic flooding, and Harvey is the second-most costly hurricane in U.S. history, after accounting for inflation, behind only Katrina (2005). At least 68 people died from the direct effects of the storm in Texas, the largest number of direct deaths from a tropical cyclone in that state since 1919.

Alaska Department of Health and Social Services, Assessment of the Potential Health Impacts of Climate Change in Alaska (2018)

(This is an excellent, detailed report of the present and potential impacts of climate change on health in Alaska.)

Over the past century, the air and water temperatures in Alaska have warmed considerably faster than in the rest of the United States. Because Alaska is the only Arctic state in the Nation, Alaskans are likely to face some climate change challenges that will be different than those encountered in other states. For example, permafrost currently underlies 80% of Alaska and provides a stable foundation for the physical infrastructure of many Alaska communities. As has already been seen in numerous villages, the groundcover that overlies permafrost is vulnerable to sinking or caving if the permafrost thaws, resulting in costly damage to physical infrastructure. The reliance on subsistence resources is another contrast to many other states. Many Alaskans depend upon subsistence harvests of fish and wildlife resources for food and to support their way of life. Some Alaskans report that the changing environment has already impacted their traditional practices.

END_OF_DOCUMENT_TOKEN_TO_BE_REPLACED

(For a detailed presentation of the legal theories, see: SMOKE AND FUMES The Legal and Evidentiary Basis for Holding Big Oil Accountable for the Climate Crisis (2017)

(Redwood City, CA, San Rafael, CA, and Martinez, CA) – Faced with mounting costs to respond
to threats to their communities from rising sea levels, Marin and San Mateo Counties, along
with the City of Imperial Beach, today filed complaints in California Superior Court to hold
accountable 37 oil, gas, and coal companies for the ongoing harm they knew their fossil fuel
products would cause by significantly increasing carbon dioxide pollution and contributing
to global warming and sea level rise. The complaint states:

END_OF_DOCUMENT_TOKEN_TO_BE_REPLACED 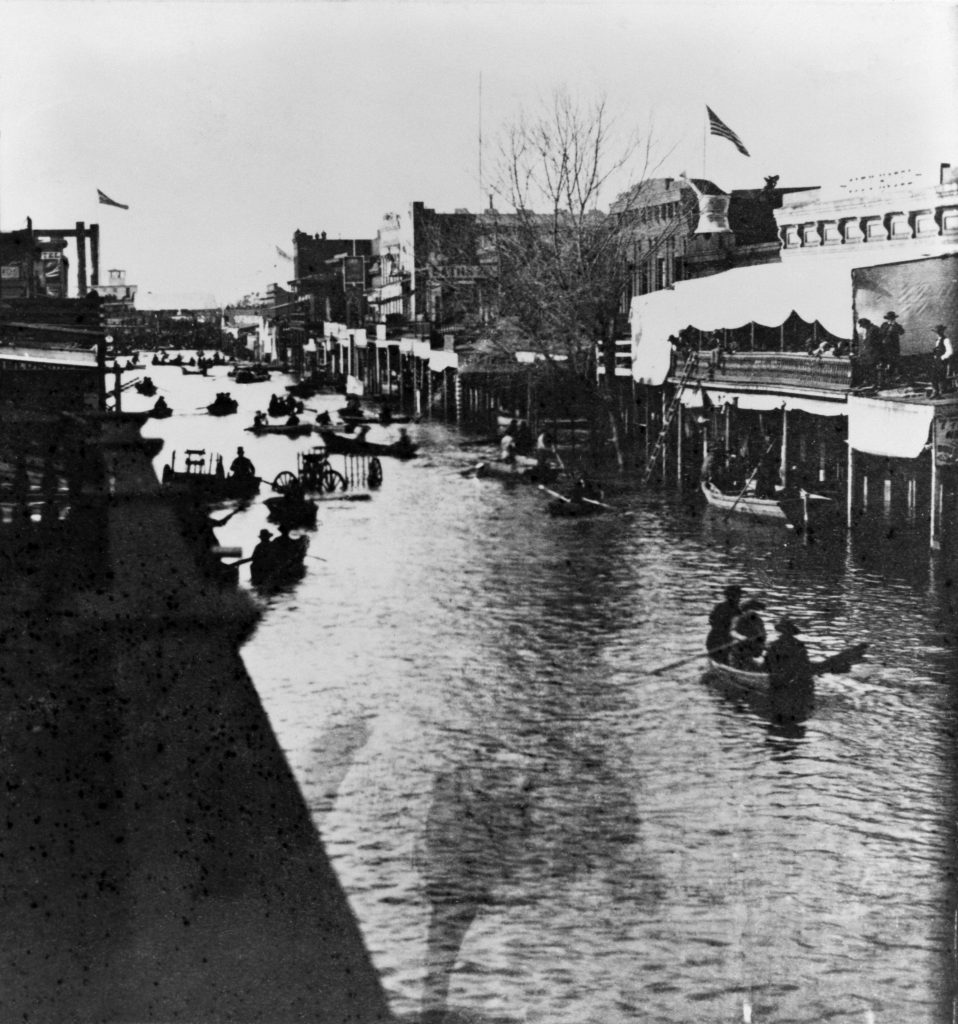 California – The Flood that Could Change Everything

END_OF_DOCUMENT_TOKEN_TO_BE_REPLACED 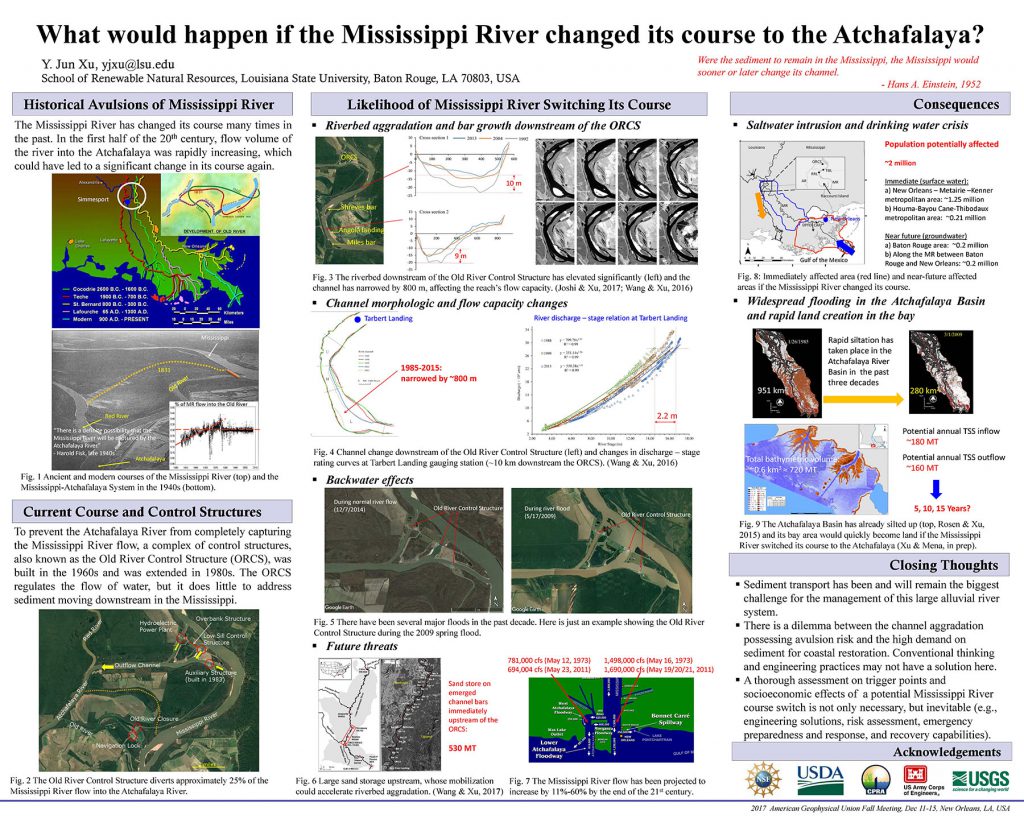 PDF – What would happen if the Mississippi River changed its course to the Atchafalaya?

The expected impacts of weather effects associated with climate change pose operational and budgetary risks to overseas infrastructure according to the Department of Defense (DOD), but DOD does not consistently track the impacts’ estimated costs. Operational risks (including interruptions to training, testing, and missions) and budgetary risks (including costs of repairing damages) are linked to these impacts. However, installations inconsistently track these costs because there is no requirement for such tracking. Without a requirement to systematically track such costs, DOD will not have the information it needs to integrate climate-related impact resource considerations into future budgets.

Despite relatively cool summer temperatures, observations in 2017 continue to indicate that the Arctic environmental system has reached a ‘new normal’, characterized by long-term losses in the extent and thickness of the sea ice cover, the extent and duration of the winter snow cover and the mass of ice in the Greenland Ice Sheet and Arctic glaciers, and warming sea surface and permafrost temperatures.