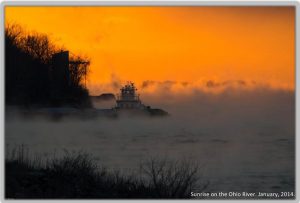 Generally, modeling results indicate a gradual increase in annual mean temperatures between 2011 and 2040 amounting to one-half degree per decade, with greater increases between 2041 and 2099 of one full degree per decade. Hydrologic flow changes show substantial variability across the ORB through the three time periods, with Hydrologic Unit Code (HUC)-4 sub-basins located northeast, east, and south of the Ohio River expected to experience greater precipitation and thus higher stream flows—up to 50% greater—during most of the three 30-year periods. Conversely, those HUC-4s located north and west of the Ohio River are expected to experience ever-decreasing precipitation (especially during the autumn season) resulting in decreased in-stream flows—up to 50% less—during the same periods.

The potential impacts to infrastructure, energy production, and both aquatic and terrestrial ecosystems over the three 30-year time periods range from minimal in some HUC-4 sub-basins to dramatic and potentially devastating in others. For example, Federal water resources infrastructure is designed using factors of safety (including hydrologic factors) that allow facilities, such as dams, reservoirs, and levees, to absorb and withstand many impacts through annual or seasonal operational modifications. However, other infrastructure that is dependent upon a reliable flow of water (i.e., hydropower and water supply) may be challenged in sustaining supplies during F2 and F3 periods without impacting other uses. Of special concern are the large numbers of thermoelectric power plants in the ORB that rely on sustained supplies of cooling water to meet national energy demand.