A fundamental premise of the most Louisiana coastal restoration plans, including the Master Plan, is that coastal salt marsh acts as a horizontal levee, reducing hurricane surge for each mile of marsh. The primary source that is usually cited for this proposition is:

This report is nearly impossible to find because it is embedded in a transmittal document with a different citation.

The report begins on document page 14. The key chart is on page 85: 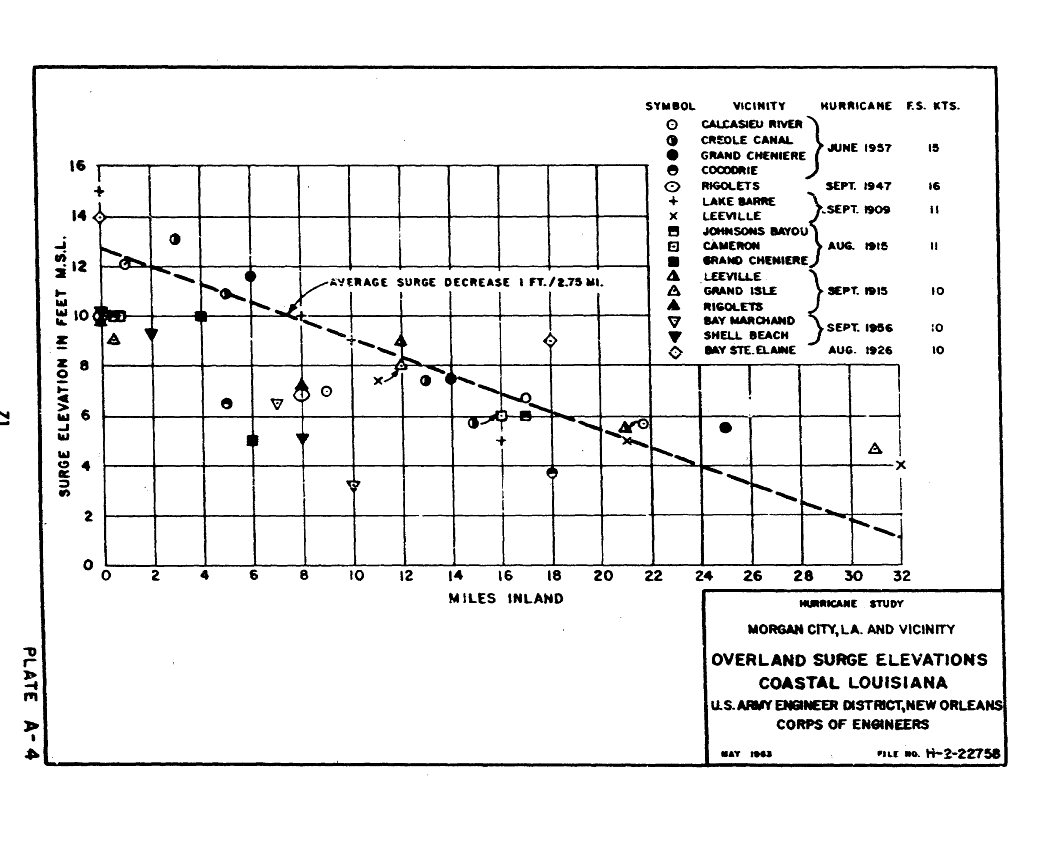 The associated text from page 68:

(5) Marshlands that fringe the coastline in certain locations are inundated for considerable distances inland by hurricane surges that approach the shores, The limit of overland surge penetration is dependent upon the height of the surge and the duration of high stages at the coast The surge height at the coastline depends primarilyn the direction and intensity of winds and the hurricane velocity of translation Numerous bays and marshes are prevalent in the area9 and also influence the surge heights at the coastline The routing of these surges overland by conventional methods was complicated by the undefinable effect of high windspeeds on flow, such that the procedures yielded questionable results when applied to different experienced hurricanes in a given location Attempts to correlate hurricane translation speeds, surge hydro- graphs at the coastline, and surge heights at inland locations also yielded inconsistent and therefore unusable relationships. The study of available observed high water marks at the coastline and inland indicates a fairly consistent simple relation between the maximum surge height and the distance inland from the coast, as shown on plate A-4. This relationship exists independently of the speed of hurricane translation, windspeeds, .or directions. The data indicate that the weighted-mean decrease in surge heights inland is at the rate of 1.0 foot per 2.75 miles. This relationship remains true even in the western portion of Louisiana where relatively high chenieres, or wooded ridges, parallel the coast. Efforts to establish time lags between crest surge heights at the coast and at inland locations were unsuccessful because of inadequate basic data.

(7) Maximum surge height contours were developed in the area for probable maximum (PMH), standard project (SPH), and moderate (Mod H) hurricanes, These contours are shown on plates A-5, A-6, and A-7,9, respectively. The contours represent maximum surge heights that would be experienced for the simultaneous occurrence of hurricanes in each of these three categories for storm paths most critical for every location. Similar contours representing simultaneous occurrence of maximum observed surge heights are shown on plate A-8.