This week it will be a pleasure to welcome you to the great State of Louisiana and to meet with you in the greatest city on earth – Chicago notwithstanding.

New Orleans still bears the scars of the summer of 2005. But since then we have experienced a Louisiana comeback. It has been a revival like no other in America.

There are now more people living and working in Louisiana than at any other time in the State’s history, earning higher incomes than ever before. A 25-year problem of outmigration has become a boom of in-migration of both people and employers. New Orleans has become a magnet for venture capital investment in its technology and media sectors.

Most importantly, with the New Orleans Recovery School District at its epicenter, our education system has been revolutionized. Charter schools and our scholarship program have given parents previously unthinkable choice and children unprecedented opportunity.

The soul of the city of New Orleans is the rhythm of its wonderful people. They have shown immeasurable courage to return, rebuild and reimagine a new future.

This week is a time to mourn the loss of loved ones and the passing of a period in our history. It is also a time to celebrate those whose future has become brighter in the storm’s terrible wake. There is a time and a place for politics, but this is not it.

It is therefore with disappointment that I read of the White House’s plans to make this visit part of a tour for your climate change agenda. Although I understand that your emphasis in New Orleans will – rightly – be on economic development, the temptation to stray into climate change politics should be resisted.

While you and others may be of the opinion that we can legislate away hurricanes with higher taxes, business regulations and EPA power grabs, that is not a view shared by many Louisianians.

I would ask you to respect this important time of remembrance by not inserting the divisive political agenda of liberal environmental activism.

Furthermore, the people of Louisiana have already agreed upon a pragmatic and bipartisan approach to preventing and mitigating the damage of future weather systems.

Since 2008, we have taken unprecedented efforts toward restoring Louisiana’s coastline. We have entirely reorganized the state’s coastal restoration, flood control and hurricane protection program by consolidating the missions of five different state agencies into one streamlined organization. We have prioritized projects that are best for the coast overall, as opposed to what is best for singular concerns like protection or restoration or mitigation.

We developed and passed – with bipartisan majorities – the Coastal Master Plan that lays out a resource-specific, 50-year, $50 billion plan for south Louisiana. It addresses the 1,880 square miles of land the State has lost since the 1930’s, through innovative tools such as long distance dredging and sediment diversions.

This process created a more efficient way of managing efforts by keeping funding consolidated and allowing for more impactful projects. Importantly, we have ensured all funding from the RESTORE Act will be used for coastal restoration projects.

A lecture on climate change would do nothing to improve upon what we are already doing. Quite the opposite; it would distract from the losses we have suffered, diminish the restoration efforts we have made, and overshadow the miracle that has been the Louisiana comeback. Partisan politics from Washington, D.C. are unwelcome in Louisiana at the best of times. This week it would be met with nothing but derision. I would therefore ask you to carefully consider your message.

In 2008 you were elected on a promise of hope and change. Since then, New Orleanians have delivered those things for themselves. It would be constructive to bring people together in that same spirit. 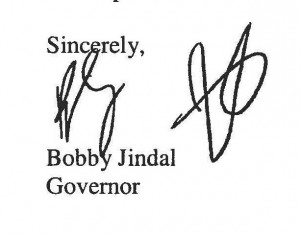