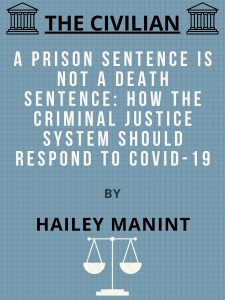 The COVID-19 pandemic is a crisis for all of humanity, but especially for vulnerable populations within our society. Prison populations are some of the most at risk when it comes to a public health crisis. Communicable diseases are an inevitability in prison living conditions. Many prisons have dorm-style living, meaning inmates sleep and live in the same room, with small, half-walls between their bunk beds. Another possibility is single-inmate cells, and while these cells do often have toilets and sinks, they do not have showers. In these situations, the inmates still have a dorm-style bathroom. This leaves them to continue to live in community with their fellow inmates, even in the face of social distancing orders from government officials. Inmates are all occupying the same space, in which there is a plethora of surfaces touched by many throughout the day. The latest research on COVID-19 suggests the virus can live in the air for hours, and can live on surfaces for 2-3 days. This truly makes prison populations sitting ducks by allowing the virus to circulate with ease.

Furthermore, prison policy regarding the treatment of sick inmates is concerning. In many American prisons, when inmates go to medical to seek treatment for an illness, they are charged a fee to see a doctor. If they do go to medical, and are found to have a communicable disease, they are often sent to solitary confinement in order distance them from others. As a matter of policy, officers do not treat sick inmates in solitary confinement differently from the others for the sake of continuity, effectively punishing sick inmates. With these policies in place, inmates are essentially scared to seek medical attention for their communicable diseases.

Louisiana’s latest strategy to combat surging COVID-19 cases in prisons is to transfer all positive cases to Angola. Inmates will be taken away from their familiar environment for an unspecified period of time. Many times, prisons may be geographically close to an inmate’s family, and they may want to maintain proximity to them. Furthermore, almost every Louisianan is familiar with the horrific human rights record of Angola. It is doubtful that an inmate will willingly be transferred to Angola with the goal of this facility nursing them back to health. These factors will deter inmates from reporting symptoms, which will allow the continuance of COVID-19’s spread to other inmates. In addition, Angola’s prison population has a significant number of elderly inmates, putting them at severe risk of contracting COVID-19.

In addition, personal hygiene products provided to inmates are inadequate under normal circumstances, and are certainly inadequate during a public health crisis. Inmates are given a very limited, state-issued amount of soap. Hand sanitizer is not allowed because of concerns about the alcohol content. The only access to other cleaning supplies comes from commissary; however, this is only an option for inmates with money. This leaves inmates unable to take personal protective measures against the virus.

The current COVID-19 crisis underscores the public health crisis which has been present in America’s prison system for decades. It is imperative that states and municipalities across the country take immediate measures to stop the spread of COVID-19 in prisons. First and foremost, the most effective way to reduce the spread of the virus is to drastically reduce the prison population. All non-violent offenders should be released from prison immediately, in addition to all inmates with a year or less left on their sentence. All elderly and immune-compromised inmates should also get special consideration on a case-by-case basis for their release. If they are not shown to be a risk to public safety, they should be released.

Once prison populations are drastically reduced, real social distancing efforts within the prison can be effectively implemented. First, all inmates should have their temperatures taken, and if they present symptoms, they should be quarantined. However, this should not be punitive in any way. If there is a prison hospital, this can be converted to a quarantine zone for positive cases where inmates can be given proper medical attention. If the number of cases exceeds the hospital’s capacity, then mild to moderate cases can be quarantined into a separate area of the prison, and given medical attention on an as-needed basis. For all of the remaining inmates not showing symptoms, they should be socially distanced as much as possible. In a dorm-style living environment, they should be distanced to the maximum amount possible, leaving several feet between each occupied bed. As far as communal bathrooms, there should be an increased effort to keep this space clean by prison staff. Additionally, only one inmate should be allowed into the bathroom at a time, and each inmate should be allowed free personal hygiene products (such as hand sanitizer, soap, disinfecting wipes, etc.) Prison staff can disperse these items in small amounts to dismiss any concern about their misuse. This will allow inmates greater personal autonomy over their own health.

It is worrying to note that many of the issues previously described, such as the punitive nature of seeking medical care in prisons, the ease of spread of communicable diseases, and the lack of access to basic hygiene products are a problem even when the world is not in the midst of a global pandemic. Hopefully, this pandemic can serve as a wakeup call to Americans about the public health crisis in American prisons, and this can launch comprehensive policy reform.

Some may read this and think: so what? Prison conditions are bad, but this is the price you pay for committing a crime. However, we have to remember that inmates have Constitutionally-protected human rights. A prison sentence is not a death sentence. Without these preventative measures, many inmates will die in state custody. Even if the health of inmates does not concern you, the health of prison staff is also at risk. These staffers go home at night. They have children. They go to the grocery store, maybe even the same grocery store as you. This public health crisis is exactly that: public. In order to stop the spread of COVID-19, and to protect public health in general, all people must be equally protected.