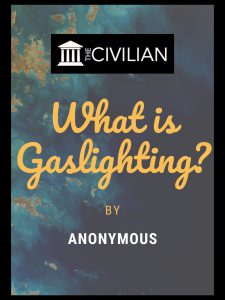 Don’t let unhealthy relationships define your time in law school. Plus, you don’t want to deal with that- you’re in law school. When you’re in law school, it’s easy to become preoccupied, and not put your emotional health first. No one wants to talk about it, but so many law students are familiar with the following term: “Gaslighting is a form of persistent manipulation and brainwashing that causes the victim to doubt her or himself, and ultimately lose her or his own sense of perception, identity, and self-worth. … Gaslighting can occur in personal relationships, at the workplace, or over an entire society.” If you have been gaslighted at any point in your personal relationships, you know that the aforementioned definition of gaslighting doesn’t quite cover the resulting effects in its entirety.

Obviously, the reason I am writing this article is based on my personal experience with a person I recently dated. Anyone who has heard about the time I spent with this person, such as friends (and my mom), advised me against continuing any sort of contact. Don’t get me wrong- when it was good, it was really good. Unfortunately, these times were few and far between. Very quickly, it became toxic, in turn affecting my self-esteem and sense of self. Gaslighting can present itself as making you feel invalidated for feeling a certain way and expressing it, namely when they say things that upset you. I found myself unhappy and emotionally drained, which affected my performance in school and my relationship with my friends. I didn’t want to tell anyone how I was feeling- but everyone could tell I was holding something back. Gaslighting makes you feel like you are always at fault, and you begin to put yourself down.

As many of you know, it becomes difficult to leave relationships like this, once you become invested. When I looked back, I realized that everything that he made out to be my fault, wasn’t.

I hope that my personal experience and the following points could help someone realize if there are similar characteristics their significant other displays in a relationship. Also, I hope that as you read this, if you are in a similar relationship that may fall under the definition of gaslighting, you find the strength to remove yourself from that situation. There are more important things (like mock trials, and con law 2). Also, keep in mind that the definition of gaslighting includes other places where it may occur, such as the workplace. As many of us begin summer clerkships, we must take notice of how we are being treated, and put our emotional health first.

How can you tell you’re being gaslighted?

The following is an excerpt from https://www.psychologytoday.com/us/blog/communication-success/201704/7-stages-gaslighting-in-relationship, and provides insight as to how gaslighting can present itself.