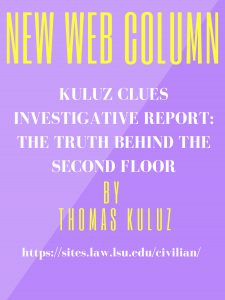 Curiosity, though it oftentimes kills the cat, has captivated me lately. Each day, as I step into the library of our beloved Paul M. Hebert Law Center, I am overwhelmed by one question that glaringly lacks an answer, “how does the better half live?” While many of us struggle to digest course material on the ground level, there are those on the second floor whose skill is matched only by their second-floor counterparts. These nearly infallible jurists have all but mastered their craft through hard work and sheer grit, surely those efforts have not gone unrewarded. What fabulous amenities there must be in the Emerald City that is the second floor, I often thought. It is this curiosity, shared by many, that drove me to go where few laymen have gone before, the inner passageways of the second floor.

My journey began sometime last week. Through an informant, that shall remain unnamed, I came to learn how to access these mythical inner passageways. An entrance, my source informed me, could be accessed by grabbing an original copy of Justice Holmes’ The Common Law from an unspecified bookshelf and whispering, three times, “For the foregoing reasons, I dissent.” After many hours of searching I found the volume, whispered the password, and the shelf transformed into a door into a long hallway. I passively stepped in and walked the length of the hall.

As I exited the hall, I gazed up at what must have been fifty-foot-high ceilings, wondering to myself how on earth the State of Louisiana could fund such a construction project. I then walked up to the receptionist, a kind, middle-aged woman named Beatrice. I asked Beatrice if I could meet with my good friend, and second-floor extraordinaire, Zachary Lester. She informed me that Zach was busy cite checking, but I could have a seat and wait for him if I’d like. As I sat down, I was approached by a butler, a British fellow judging by his accent. He offered me a beverage from a shockingly diverse menu of options. Egyptian tea was the choice. In a few minutes, the butler returned with a temperate, but not too hot, cup of Egyptian tea in hand. I grabbed it from him and offered my sincerest thanks. I lifted the cup and took a sip. As the tea made contact with my pallet, I closed my eyes and a suffocating heat overcame me. I opened my eyes to the realization that I had traveled back in time, to the days of the pharaohs. I was adorned in traditional Egyptian garb, sun beating down on my face. I looked into the distance, saw the Great Pyramids, and shortly realized that I was riding a camel as well. I gathered my senses and found that there was a riot taking place at the market. The commoners, fueled by anger, were attacking one of the merchants. Suddenly, I discovered that I could speak the native tongue. I asked a nearby patron what was going on. He replied, “Cairo is sick with fever, and the only prescription is more tea.” I took one last sip from my cup, gulped it down, closed my eyes, and awoke to find my friend Zach waving his hand in front of my face. “I see you’re back, would you like a tour?” he said.

← Managing the Monster
Comparison is Truly the Thief of Joy →