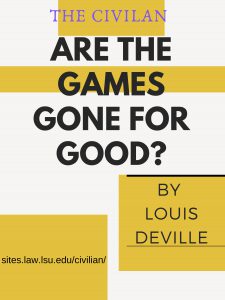 Binno and Taylor alike will now be working with the LSAC, as well as the Wayne State University Law School’s Disability Law Clinic out of Detroit, MI, in order to ensure the LSAT becomes more accessible for any future test takers. The measure is part of an agreement the parties reached together in early October, rather than continue with any future litigation. The following is an excerpt from the LSAC’s October 7 Press Release following the announcement that they will be phasing out the section:

“LSAC has begun research and development into alternative ways to assess analytical reasoning skills, as part of a broader review of all question types to determine how the fundamental skills for success in law school can be reliably assessed in ways that offer improved accessibility for all test takers. Consistent with the parties’ agreement, LSAC will complete this work within the next four years, which will enable all prospective law school students to take an exam administered by LSAC that does not have the current AR section but continues to assess analytical reasoning abilities.”

Many have hailed the agreement as a windfall for any prospective law students like Binno or Taylor who are also visually impaired. Binno himself says he plans to take the LSAT again soon, and plans to pass. However, reception has not been wholly positive. Hayden Presley, a 2L at the Paul M Hebert LSU Law Center, is a blind law student with his own ideas concerning the recent development.

“I don’t think the change is a necessary one at all,” said Presley in an informal interview. “I think it’s harmful, in fact. If this process is meant to measure a hallmark of the profession, you need to be able to do it, and you need to be able to display that skillset. I’m dubious that there is much LSAC can do.” Presley disagrees with the elimination of the logic games section as it is currently known, as he believes many law schools use the reasoning skills the LSAT measures as benchmarks for admission, factored into the overall score itself.

Presley took advantage of many of the accommodations Binno refused, notably taking an electronic version of the test. Other accommodations proved unnecessary, however. “I took the LSAT on a computer and wrote my answers into a text file that was later scored. I was given double time for the exam itself, although I ended up not needing it.” When asked about his own method for handling the problems, Presley offered a few words describing his process. “It’s obviously hard to say how much harder the logic puzzles were for me than they were for someone with sight, but I did have to improvise a little. I created textual representations of the graphs. My process consisted of a kind of visualizing the problems; my major in undergrad was computer science, so I’d gotten pretty good at working through

various permutations of a puzzle. Plus, many didn’t even need diagrams at all, just basic reasoning through.”

The extent to which Presley’s concerns are founded will depend upon what the LSAC, Binno, Taylor, and the WSU Law Disability Clinic are able to develop that replaces the logic games section. Whether or not the new section of the test will be able to be more accommodating while retaining its use as a measurement for an individual’s analytical reasoning abilities is yet to be seen.

← Comparison is Truly the Thief of Joy
New Journal on the Block: The LSU Law Journal of Social Justice and Policy →