Sohil Sharedalal (Share-da-lawl) had never been to Louisiana before he came for 1L orientation. His unbridled enthusiasm for the law and excitement to start the next chapter of his life was met with the worst flooding the Baton Rouge area has received in years. To continue that warm welcome, he sat down with me for an interview. 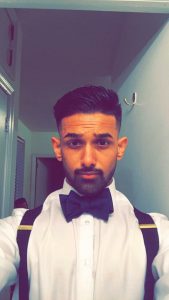 Q: What attracted you to law school and/or LSU?

A: Because I wanted to, I’m a pretty random person.

Q: What has been surprising about your law school experience so far?

A: It’s sometimes pretty easy to be lulled into a sense of security. You will wake up one day thinking law school is not that bad, but then the next day you will go to class and be completely lost. Definitely not used to studying as much as I have had to do.

Q: What class do you most look forward to? Why?

A: I’d probably say ACJ. It’s very interpretative of the law and it’s not very straightforward. There’s not always a clear-cut answer, which I like.

Q: What do you enjoy doing outside of law school?

A: I’m big into music. Coming from New York, I have a lot of friends in the media industry. I played the cello until I started college. I had to make the decision between playing full time or swimming in college so I ended up putting cello on the back burner for a little bit, but I hope to get back into it.

Q: When did you learn to drive?

A: We took the train everywhere. I learned how to drive when I was 17, but I didn’t actually drive full-time until I was a junior in college.

Q: What is the biggest difference living in the south versus up north?

A: For starters, the fact that we can sit outside right now in shorts, and definitely the Cajun food here that you can’t get in New York.

Q: Whose accent do you prefer?

A: Well I like New York rap more than Southern rap, but I don’t think I really have a preference.

Q: What was your major in undergrad?

A: I started out at Buffalo as a business major, but then transferred to Binghamton and majored in philosophy with a pre-law focus.

Q: How did you get into swimming?

A: In my sophomore year in high school, I took a class and got really into it. I joined a club team the following summer and eventually got recruited for college.

A: Definitely Phelps, he’s the GOAT.

Q: Where is your favorite place to go to in Baton Rouge?

A: Happy’s downtown. There is a big patio in the back that reminds me of my favorite beer garden back home.

Q: Do you have any special Valentine’s Day plans?

Q: What is the most romantic thing you’ve ever done?

A: Probably hold a girl’s hair while she threw up, and tell her it’ll be alright.

Q: What is the worst pickup line you’ve ever used?

A: I “accidentally” left my laptop in my now girlfriend’s apartment.

Q: What would you be doing right now, if you didn’t go to law school?

A: I actually told my parents one time that I’d be fine with disappearing and being a fish farmer in Cancun if all else fails. Still an option I consider on bad days.

Q: Where do you see yourself in 10 years?

A: Hopefully living something like Ari Gold’s lifestyle. I want to go into sports entertainment and media law.