At the end of September, LSU Law’s Trial Advocacy program sent four students to Montgomery, Alabama to participate in Faulkner Law’s inaugural Mockingbird Trial Competition. The competition was named after the modern literary classic “To Kill A Mockingbird” to celebrate the civil rights history of the city of Montgomery. For the prosecution, LSU Law was represented by Stephen Geist and Kristen Richardson; for the defense, Kathryn Jakuback and Tyler White. We were coached by Lindsay Blouin and Joshua Newville from the East Baton Rouge Parish Office of the Public Defender. 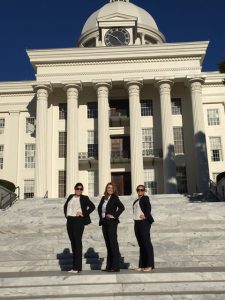 Our defense team was selected to compete first against University of Missouri Kansas City. Following our presentation of the case, our team waited anxiously for substantive critiques from the judges. The judges commended each of the attorneys individually, praising the LSU Law advocates for our professionalism and skill in front of a jury. Before the conclusion of critiques, however, one of the judges put down her clipboard and said that she “just had to address something”. The judge, Ms. Carrie Shaw of the Montgomery County District Attorney’s Office, read my name off the notes in front of her.

“Kathryn Jakuback,” she called, looking across the courtroom at me. “You really should be wearing a skirt instead of a pantsuit when you’re addressing a jury.”

I stared back at her incredulously as she nodded and continued, informing me that my dress was unprofessional, especially since we were in “the Deep South”. She ignored my fists balled in rage and the furious spots that were rising on my cheeks while she almost apologetically told me “that’s just how it is for women–we may not like it, but that’s how it is”.

Professor Brooks, director of Trial Advocacy at LSU Law, sent an email to Faulkner’s Trial Advocacy director alerting him to the discriminatory commentary aimed at the female advocates participating in the competition. Joseph Lester of Faulkner replied with a lukewarm “that’s just how it is,” echoing Ms. Shaw’s sentiments in the courtroom.

The LSU Law team, feeling moderately discouraged, proceeded to the next day of competition. At the conclusion of the defense’s presentation of their case in chief, I asked our judge for a recess prior to proceeding to closing arguments. Our judge peered over the bench at me and scoffed. “Why?” he demanded. “So you can go powder your nose?”

On her experience in Montgomery, Kristen Richardson said that she was “extremely disappointed.”

Despite the undercurrent of discrimination LSU Law advocates experienced at the cradle of civil rights in America, steps have been made towards the goal of achieving an inclusive profession. On August 8, 2016[1], the American Bar Association incorporated into the Model Rules of Professional Conduct the proclamation that it is “professional misconduct for a lawyer to engage in conduct that the lawyer knows or reasonably should know is harassment or discrimination on the basis of race, sex, religion, national origin”[2] While it is certainly heartening to see that the ABA takes concerns of discrimination seriously, the Model Rules are more like guidelines for the states and have no binding authority. Though ineffectual as a punitive instrument in cases of discrimination, Professor Brooks expressed that he has modeled LSU Law’s Advocacy programs and his standards for guest judges off of Model Rule of Professional Conduct 8.4 since its adoption.

“All Advocacy Programs score sheets, judging materials, and invitations to judge for all competitions, both internal and any national ones that we host, will include language modeled on the ABA’s newly adopted rule 8.4(g) and its guidance memo. We will also be explicitly stating in all judge orientations before competition rounds start that these competitions are an educational program and that judges should strictly limit critiques to the advocates’ case presentations.”

This competition has become something of a legend among the PMH community, and has prompted scores of female colleagues to share their own experiences of marginalization. The two comments made during the competition are illustrative of the discrimination female advocates face daily in their school or workplace environment and indicate that we, as a profession, have a long way to go.