On August 10, 1993, Justice Ruth Bader Ginsburg took her oath of office to become only the second female to sit on the United States Supreme Court.  On that day, she gained the power to shape the laws and policy of our nation, but at what cost? Recently Justice Ginsburg has come under fire for her comments regarding Republican presidential nominee Donald Trump in advance of this year’s presidential election.  As reported by CNN, this past July, Justice Ginsburg called Trump a “faker” who “has no consistency about him” adding that “[h]e really has an ego.” Trump fired back by saying that Ginsberg’s brain is “shot” and that she should resign. While retaliatory comments are nothing new for Mr. Trump, several politicians and political analysts also believed that Justice Ginsburg’s comments were out of line.[1]

Though Justice Ginsburg has since apologized, the criticism she received suggests that while Supreme Court Justices gain the right to shape our country’s laws, they forfeit rights as well, namely the right of free speech. Simply put, many believe that when speaking outside the courtroom Supreme Court Justices should remain above partisan politics. A conversation with LSU Law Professor Paul Baier and a review of the of the Court’s involvement with politics throughout history illustrates that expecting our Supreme Court Justices to remain apolitical might be reasonable, but not realistic. 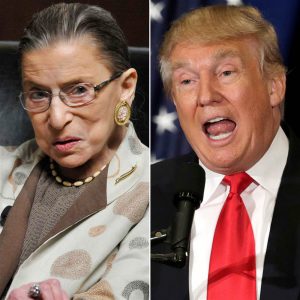 As noted by Professor Baier, the Supreme Court’s political nature dates back to the earliest days of our nation and is rooted in the Constitution. He adds that, while not explicitly granted by the Constitution, the Supreme Court’s power of judicial review necessitates its involvement with politics. Baier argues that, because the Court has a duty to review the acts of other branches of government, the Court must make “political” decisions so as to maintain the separation of powers.

Despite this seemingly immeasurable power, Professor Baier cautions that in some instances the Court will exercise restraint in accordance with the doctrine of justiciability. For example, the Supreme Court will not decide questions regarding foreign affairs or natural security, though both issues could be described as political. Under the doctrine of justiciability, the Court also refrains from hearing “political questions,” which contain issues that the Constitution deems the sole responsibility of other branches of government.

Professor Baier also points out that the process by which Supreme Court Justices are nominated and confirmed is inherently political. Article II instructs the President to nominate and, with the advice and consent of the Senate, appoint Supreme Court Justices. We had an opportunity to witness this process firsthand following the death of Justice Antonin Scalia in February. To fill the vacancy left by Justice Scalia, President Obama nominated Chief Judge Merrick Garland of the D.C. Circuit. However, the Republican-controlled Senate has refused to hold hearings regarding the President’s nominee.

Both the President’s nomination and the Senate’s subsequent refusal to confirm Judge Garland have been widely publicized, highlighting the political nature of the Supreme Court in today’s political climate. Yet the politicization of the Supreme Court is by no means a creature of contemporary politics. Toward the end of his 35-year term—the longest in history for a Supreme Court Justice—Justice William O. Douglas spoke against the U.S.’s involvement in the Vietnam War on numerous occasions. In addition, many would argue that Justice Abe Fortas, who served from 1965 – 1969, would have never been appointed to the Supreme Court if not for his close ties with President Lyndon B. Johnson. Of course, for each overtly political justice there seems to be an apolitical counterpart. Professor Baier notes that Justice Hugo Black never voted in a presidential election after he was appointed to the Supreme Court. One could only guess how Justice Black may have reacted had he sat on the Court in 2000 when the Supreme Court was asked to decide the fate of a presidential election in Bush v. Gore. According to Baier, this case serves as a prime example of the Court’s involvement with the political process in necessitous conditions.

While one could argue that Supreme Court Justices must inevitably make political decisions, such decisions may belong in the courtroom, not in the court of public opinion. Justice Ginsberg’s comments and subsequent backlash highlight the danger of using biased rhetoric while serving in a role lauded for its independence from political forces. Judicial exclusion from partisan politics inherently protects the rule of public law. If the public believes that Supreme Court decisions are politically motivated, acceptance of these rulings may be undermined and challenged based on impartiality. While it is naïve to assume justices do not have political views, voicing opinions runs the risk of distorting perception and subsequently harming the legitimacy of the Court.

← LSU Law’s Powderpuff Fundraiser Earns Success On and Off the Gridiron
Fight or Flight: When Clowning Around Turns Criminal →