Newly appointed LSU Law Dean, Thomas Galligan, Jr., began his inaugural semester with a full plate. The Great Flood hit the week before classes were set to begin, ravaging a substantial portion of the Baton Rouge area. Resuming classes with a school full of flood affected students and faculty presented a logistical nightmare. Weary and shell shocked, we trekked to campus, unsure of how to approach a fresh set of classes in the wake of the wreckage.  However, a message of reassurance quickly appeared in our inbox.

Although a new voice to most, Dean Galligan’s words felt familiar, rallying the troops in a way reminiscent of the Cheney Joseph era of PMH. Dean Galligan worked diligently with the faculty to coordinate relief efforts, connected affected students with peers willing to help, and pledged his full support as we attempted to return to normalcy.

As the first taste of cooler weather approaches, the waters have calmed. The hastened pace of a fall semester packed with classes, competitions, and events is evident as the hallways buzz with activity. While LSU Law has largely transitioned past recovery mode, Dean Galligan’s steady presence is still apparent. On any given day, he may be spotted conversing with students about anything from LSU football to concerns on campus. Rather than issue decrees from the ivory tower of the fourth floor, he makes an effort to relate to the trials and tribulations of law school life. He seems to remember that he was once in our shoes. 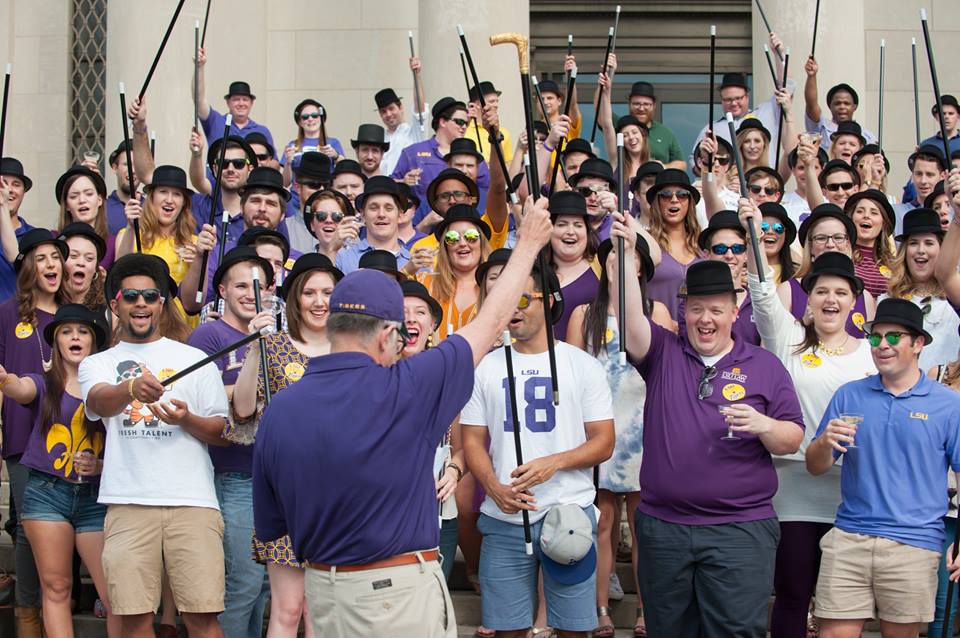 Dean Galligan rallies the 3L troops at the 2016 Hats N Canes celebration on the steps of the LSU Law Center.

Growing up the son of an attorney, Dean Galligan figured his path would likely lead to law school, but he also fostered a keen interest in creative writing. At the ripe age of nineteen, he swore off the legal world, proclaiming that he never wanted to be a lawyer. Like many young adults, his rebellion eventually wore thin. When faced with a decision between a law degree and a masters in creative writing, he chose not spend his life wondering “what if.” He enrolled in the University of Puget Sound School of Law (now Seattle University) and recalls contentment in his choice three weeks in to classes.

“It was like being at the dinner table because I had been conditioned as a child,” Dean Galligan remembered. “I loved the questions. As an undergraduate political science major, I would read a book a week and I would listen to what somebody else thought about it. As a law student, I would read 15-20 pages a night per class and it would be up to me to figure out what I thought about it.”

The dean still winces at memories of an immense workload and one-shot exams. A typical law student is familiar with the format of one final exam per class, each semester. Now imagine if professors only issued one exam, per year. Dean Galligan faced this reality during his 1L year, likening his first finals season to a fever dream.

Although it may be his first year at the helm, Dean Galligan is no stranger to LSU Law. He taught Torts and Admiralty courses at PMH for twelve years and was deemed “Favorite Professor” by the LSU State Bar Association a record six times. He notes several improvements since his last residency at the Law Center.

“When I was here, there were no clinics or externships. The experiential learning program and the trial advocacy program were just getting started. It is a much more diverse institution and the student organizations seem more vibrant. When I left, I think almost thirty percent of the first year class, even in 1997, didn’t come back in the fall of 1998. The statistics now show an amazing change for the better.”

While he concedes that the curriculum is still demanding, the community is much more supportive. “The walls don’t seem to bleed the way they did back then,” he states in jest. When questioned about his administrative strategy, Dean Galligan reveals that his philosophy for leadership centers on the tenets of shared governance and transparency.

“I try my best to listen and be accessible and available. I want faculty and staff to participate in what the future of the institution is. I try to seek advice and process feedback as much as possible.” He also stands by his objectivity, remarking, “I always tell people, ‘I want to like your friends but don’t make me hate your enemies, just because they’re your enemies.’”

In regard to the future of LSU Law, Dean Galligan envisions strengthening the practice ready aspect already instilled in the J.D. program.

“We provide outstanding legal education that is both theoretical and practical at the same time. Our students understand legal theory but can adroitly, ably, and ethically solve real world legal problems.”

He also strives to capture and communicate the wide array of opportunities available to LSU Law students.

“We’ve got a great moot court program, clinics, excellent class instruction, strong legal writing training, esteemed guest speakers and adjunct professors. We’ve got the D.C.L. degree and the energy certificate. We need to shape our central messages to encapsulate all those strengths and say ‘this is LSU Law,’ without building bureaucratic structures that waste our time and slow us down.”

Any football fan would acknowledge that one of the perks of moving back to Baton Rouge would be the chance to soak in Saturdays at Tiger Stadium. While Dean Galligan fondly recalls days spent at his alma mater venue, Stanford Stadium, he admits there truly is no place like Death Valley. He recently made his Law Tailgate debut when he valiantly led the Class of 2017 in their Hat and Canes champagne toast. Hat on, cane in hand, his message to the soon to be graduates showcased his ability to unite and inspire our close knit community.

“Let us raise our glasses. Let us honor all who have gone before you. Let us celebrate a today better than yesterday. Let us dream of a tomorrow better than today. And to you, the outstanding, incredible, one-of-a kind, one and only, Class of 2017 – HERE HERE!”

If his passion for our future serves as any indication, LSU Law is fortunate to be in very capable hands.