The 13th Gate is where your worst nightmares become reality. Known for its ultra-realism and extreme detail, this haunted house has become notorious as the scariest in America as recognized by MTV, Travel Channel, and other reviewers. In fact, a recent poll through the world’s largest haunted house directory, Hauntworld.com, found the attraction to be the scariest Halloween event in the country. Even Playboy magazine says, “This haunted house will scare the $#%^ out of you.” 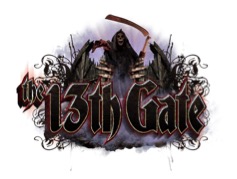 The experience consists of 13 indoor and outdoor areas that are created by a professional movie industry construction crew each year. Expect your adrenaline to be pumping while trying to run from the 160 professional actors dressed and trained to resemble all of your childhood villains, but watch your step when crossing the rickety bridge over the Louisiana swamp filled with hundreds of hungry, hissing real-life snakes…

Isabella Mallow, LSU senior and forensic anthropology major, began working as an actor at the 13th Gate this fall and relishes the opportunity to create unique characters every week. Mallow wears haunting makeup and costumes every night in order to completely submerge into the dark fantasy world created at the haunted house.

“The 13th Gate is so incredibly well designed and has so many intricacies, entering it is like entering another dimension,” Mallow described. “Even the air smells convincingly frightening,” she continued. “That is what sets it apart from most of the other haunted attractions in the nation. You can walk onto the set all alone with the lights on and still feel utterly fascinated by what surrounds you.”

If you manage to survive the 13th Gate, be sure to check out Necropolis 13, which is located across the street from the haunted house. Covering an entire city block, it is a haunted New-Orleans style cemetery that is roamed by zombies from the 400 crypts on the premises. After descending 13 steps into dark, underground catacombs, it’s a half-mile terror-filled trek to the exit.

If paying to have people scare you is not really your style, try out the 13th Gate’s newest interactive “escape” experience. Similar to the concept in the Saw movies, you (or your group) are trapped in one of several themed rooms and have sixty minutes to use logic, instinct, and critical thinking to find secret passages, solve puzzles, crack codes, and uncover hidden mysteries that will ultimately lead to your escape.

The 13th Gate and Necropolis 13 are now open Thursdays, Fridays, and Saturdays from 6:30- 11:30 pm until November 5 (not open on November 3). Additionally, they will be open every day from October 23- 31. The attractions are located at 832 Saint Philip Street downtown next to the Belle Casino and Pastime Restaurant. Free parking is available underneath the I-10 overpass. General Admission for the 13th Gate is a little steep at $25 online and $30 at the box office, but coupons are available and easy to find. Admission for Necropolis 13 is a little cheaper at $20 both online and at the box office. Check out midnightproduction.com for group and special pricing and more information.

← Sunday Funday with Schwab: Table Kitchen and Bar
Race to the White House: A Guide to the Presidential Election of 2016 →