Most of us at PMH are no strangers to the Sunday blues. I for one can attest to the fact that one of the worst feelings in the world is waking up after an exciting weekend of GIFs, tailgating, and Tiger football, only to realize that tomorrow begins another excruciatingly long week of classes. At this point, we are faced with two options: sulk to the library and read for Fed Courts or ditch the books and pray that Devlin forgets your name tomorrow morning. Because I’m obviously partial to the latter option, in each issue I will review new and noteworthy places around town in an effort to ensure that your next Sunday is indeed a Funday. This month’s column will be kicked off with a review of one of Baton Rouge’s hottest food spots – Table Kitchen and Bar. 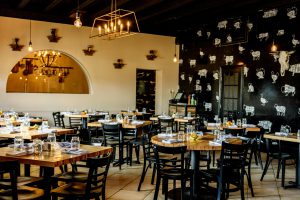 Since its genesis a year and a half ago, Table’s farm-to-table dinner menu has become widely regarded as a staple in the Baton Rouge foodie community. However, Table’s lesser-known brunch option is a true hidden gem. A live jazz band and a perfectly curated southern style menu was Table’s response to the brunch trend that has swept the city and nation alike, and my experience there left almost nothing to be desired. Luckily, I aired on the side of caution in calling ahead for a reservation because my guest and I were greeted with a buzzing crowd of people putting their names on a waitlist upon our 11 a.m. arrival. The eclectic group of diners included all walks of life; although the majority were couples in their late twenties and early thirties, there were, of course, also tables of college girls retelling last nights’ stories and well to-do Baton Rouge families gathering for a post-mass meal. Although Table describes their mid-morning mealtime as a “jazz brunch”, the live music on this particular day wasn’t your typical New Orleans jazz, but instead included a folky twist which fell perfectly in line Table’s overall theme. The incredibly talented musicians coupled with the rustic no-frills décor including mason jar drinks, cloth-less tables, and chalkboard art created a high energy yet casual ambiance. 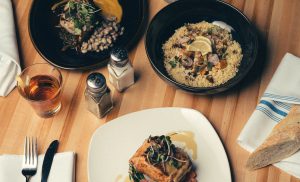 Naturally, we began the meal with drinks; the bottomless mimosas seemed to be the obvious choice for me, while my guest ordered an off-menu brandy milk punch (which is definitely something I recommend if you’re looking to indulge early on). As an appetizer, we ordered the boudin balls and lump crab cake, both of which included a homemade remoulade sauce. Admittedly, I am an incredibly harsh critic when it comes to boudin balls considering I am a Cajun girl through and through, and I must confess I was unsurprisingly underwhelmed with this Baton Rouge version of my hometown favorite. However, the crab cakes had the perfect ratio of lump meat to filling (a moderate amount of filling compared to meat), making this appetizer an anomaly in the mid-priced restaurant game. For my main course, I ordered the shrimp and grits and asked that the chef add a few strips of bacon to the dish. Creating flavorful shrimp to perfectly compliment the grits is an insanely hard to balance strike.  Due to this delicate balance, I’m a firm believer that the quality of this dish will give you the most accurate sense of a Louisiana restaurant’s worthiness.  Much to my surprise, I absolutely loved Table’s rendition of this age-old favorite. Not only did the shrimp include some of the onions with which they were sautéed, but the sauce was an incredible combination of both sweet and savory flavors. The addition of bacon only perfected this dish.

Overall, I would absolutely recommend this as a brunch spot for anyone looking to wander out of their Netflix-induced Sunday comas and venture into public. Table would be the perfect place to get together your rowdiest group of gal pals for an afternoon of hearty laughs and heartier food. And for guys, go ahead and ask that hot 1L you’ve been eyeing on a date, and impress her by ordering an off-menu brandy milk punch to show her you’re super connected and totally in the know.

← LSU Law Students Band Together to Rebuild After the Floods
The 13th Gate: The Scariest Haunted House in America →