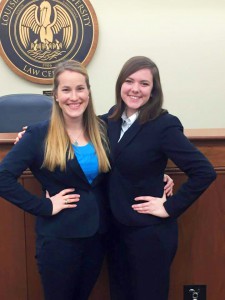 Congratulations to Caitlin Cline and Rome Gonsoulin, the winners of the 2016 LSU Arbitration Competition!

On January 29-31, the LSU Law Trial Advocacy executive board will host its 5th annual Arbitration Competition. The competition, which dates back to the 2011-2012 school year, focuses on disputes which arise in transactional or business settings, such as employment-related disputes or disputes over real property. This year’s competition centers on a dispute between an individual and a farming corporation regarding the sale of real property. According to Professor Jeff Brooks, Director of Trial Advocacy Programs at LSU Law, the 2011-2012 Trial Advocacy Executive board created this competition in light of the need to prepare students for alternative dispute resolution, which is becoming more common in today’s legal landscape.

Matt Roth, the Executive Board’s Vice President of Internal Competition, who was a finalist in last year’s competition, echoes the importance of arbitration in today’s legal landscape. According to Roth, the Arbitration Competition is like “Flory sitting down” but with some key differences. Roth notes that arbitrations are less formal than a traditional trial and take place between a claimant and a respondent, not a plaintiff and defendant. In addition, while a judge oversees a trial, an arbitration is overseen by a fellow attorney, or, in this case, a peer.

Most importantly, however, arbitrations are not bound by the rules of evidence, which may come as a relief to students who lack strong evidence skills. Indeed, Roth strongly advises former Flory participants who are participating in the arbitration competition to read the rules because, like Flory, a lack of familiarity with the rules can be detrimental to a team’s success.

According to Roth, “If your opponents know the rules and procedures to a particular arbitration and you do not, you will have a huge disadvantage that may just cost you the round.”

Roth and Professor Brooks also agree that arbitration is less dramatic than a typical trial and emphasizes each party’s arguments as well as civility between the parties. Professor Brooks also adds that, while Flory is spread out over a month, the arbitration competition takes place in a single weekend. While this is the likely result of a smaller number of participants—approximately 8-10 teams—that number should increase in light of the growing popularity of alternative dispute resolution.
In addition, Roth recommends the competition for anyone interested in transactional law or anyone who simply wishes to sharpen their general advocacy skills. Roth notes that the arbitration competition can provide a nice segue for those seeking to participate in other trial advocacy competitions. “The lack of emphasis on evidence rules and less rigid atmosphere makes arbitration a good fit for someone who is nervous about their first try at a trial advocacy competition.”
For more information on this year’s competition, including the rules and deadlines, see http://advocacy.law.lsu.edu/competitions/arbitration/.

*Congratulations to Caitlin Cline and Rome Gonsoulin, the winners of the 2016 LSU Arbitration Competition!