It was the end of my 1L summer, and classes were due to start back in three days. I had yet to get a copy of the textbook for my Evidence class. I made it to the bookstore right before it closed for the week, but, to my earnest disbelief, there were no copies left in stock. The class had an assignment for the first day, and considering what happened the last time I didn’t prepare for a lecture, I was not comfortable going into class empty-handed. Being so short on time I realized that my only option was to photocopy the assignment out of someone else’s book…but to whom could I turn to in this hour of need? 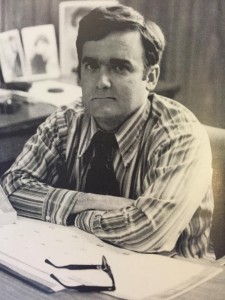 I didn’t even know who was taking the class – much less if it was any one I knew. Suddenly it dawned on me that I could just ask the professor. I had taken his Criminal law class just the year before. He always seemed friendly and willing to help anyone, especially a student. He had a warm and welcoming presence in the student body; he was always present at everything from toasts and speeches to student “athletics” and student tailgate parties. I was sure that if I asked he wouldn’t mind me taking his copy of the textbook down to the library for a few minutes.

I went up to his office on the top floor and popped my head through the doorway. I always looked before knocking because this professor had a permanent open door policy. His doorway always open whether he was there or not. Every time I looked in his office I was always taken aback by its magnitude, its sheer breadth of knowledge, and its relics of experience that filled the room. The walls were lined with books from corner to corner, and his desk was covered in printed court opinions in stacks three feet high.

On that day, the professor was in. He was sitting at his computer in the farthest corner of the doorway almost hidden behind the stacks that covered his desk. He invited me in once I caught his attention, but I just paced the floor as there was no available seat. With him you never really knew where a conversation would start or end, but you could be certain that the subject that brought you there would be somewhere in between it all.

After discussing summer activities and old-truck repair, I explained to him my textbook conundrum, and he told me that he would be happy to help. However, to my surprise, he offered not only to lend me the first assignment, but the whole book until I could get a copy for myself. I tried to tell him that I could not bring myself to deprive him of his own text just a few days before the first lecture. However, he assured me that he had plenty of copies. He led me to bottom shelf of one corner of his personal library where he reached under a stack of books and pulled out an older edition of the text. “The rules don’t ever really change, but they just keep printing books,” he told me. “You should be just fine with this edition.”

What stood out most to me was not the fact that he was so generous in his favor, but that there was something that I found in the book itself. As you may suspect, the margins of this particular book were full of scribbles, notations, and what appeared to be directional symbols interweaving through selected sections of various opinions. What struck the loudest nerve with me was this one small note: “old pork in the pocket.”

The note was relevant to the facts of the case as the defendant did, in fact, steal pork by shoving it in his pocket. However, the note did not really seem to convey any actual information, and it certainly didn’t have anything to do with the legal aspect of the case. Luckily, Evidence was my first class of that semester so I did not have to wait long to find out the real reason behind this note.

The first day of class, the professor went through his lecture as he always did. He opened each case with a methodic and dramatic reading of the facts. He was able to truly humanize the defendants in all of the cases he taught by concocting around them the most outlandish circumstances, which always led to their misfortune with the law. The defendant in the subject case was no different. The professor wove together a story of the defendant’s hard times that left him hungry and penniless, a situation so grave that it led him the “old pork in the pocket” trick. That was all that the note was for in the end. It was just a softening of the criminal activity. Theft, as viewed through his lens, was nothing more than the “old pork in the pocket” trick.

I couldn’t believe it – what a priceless moment. I quickly realized that the note was in my book. Did he copy his notes from edition to edition? How many of his jokes did he keep recorded in the margins of these books – of all of his books? How far back in his career did the jokes extend? Was he so masterful and comfortable with the material that he had it all on the top of his head and in every fold in the pages?

I realized that his stories surrounding these cases and rules were not simply materialized and empty. Rather, each story had the same dimensions and layers that his office contained. Each story was rich in depth, and all the experiences that he gathered through his long and full life spent learning, working, and shaping much of the material he was conveying to us now. These stories were not just entertainment, but rather, they were individual capsules of priceless information. They compiled what would be the last known attempt to teach criminal and evidentiary law of Louisiana through a unique oral tradition.

← Jogging for Cheney Joe
Framed! with the Hitchcock Blonde →