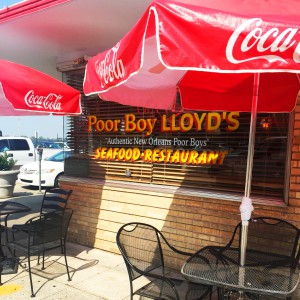 After two months of having brunch together, Professor Brooks finally uttered those three words my heart has been waiting to hear: “Time for lunch.”
For our first Lunchin’ outing, we decided to kick it old-school and experience a meal at the oldest downtown restaurant in Baton Rouge. Located one block from the Mississippi River, Poor Boy Lloyd’s has been serving breakfast, their famous po’ boy sandwiches, steaks, and seafood for over forty years. Live music is also available on Friday nights. (201 Florida St. 225-387-2271)
If you are looking for a slice of Louisiana culinary history at a historical location, Poor Boy Lloyd’s is the place for you. Although finding a parking spot close to the restaurant may be difficult during the lunch hour, a short walk usually does a body good. At first glance, Poor Boy Lloyd’s hits the mark on every angle of the “must try” lunch trifecta: 1. Historical 2. Family-Owned and 3. Hole-in-the-Wall Location
As a reminder, every month Professor Brooks and I, along with a rotating “mystery diner” guest will order three separate lunch/brunch dishes from restaurants that are not only affordable, but are a little bit off the beaten path. All restaurants will receive an overall rating between 1-5 gavels, with a 1 gavel rating being “poor” and a 5 gavels rating being “excellent.”
If you have a lunch or brunch location you would like to see reviewed, please feel free to e-mail your suggestion to avalur1@lsu.edu or jeffbrooks@lsu.edu. 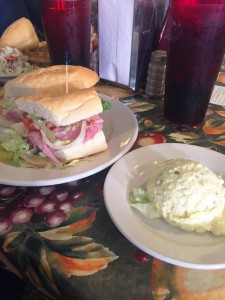 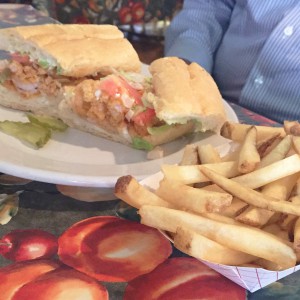 Although I have only lived in Louisiana for three years, I have come to appreciate the satisfaction that comes along with eating a good authentic po’boy. Poor Boy Lloyd’s is a place I’ve walked by a time or two during my treks to downtown happy hours, but I never ventured inside.
On the surface, the modest restaurant exterior epitomizes old school Baton Rouge cool. The combination of the weathered brick walls, the hand painted glass, and the red Coca-Cola patio umbrellas all seemed to call out, “Come on in! How’s your Mom and them?” Once inside however, instead of feeling like I just received a welcoming hug or kiss on the cheek, I felt like I had stepped into an outdated, musty, and tacky time warp.
Life experience has taught me to never judge a book by its cover, so my spirits perked up when I spied the chalkboard of unexpected daily specials that included rabbit, venison, and alligator meat. Even though I found these non-traditional meal options to be very intriguing, I couldn’t resist the magnetic pull to place my order for a Rich Boy….the po’boy, that is. The Rich Boy is a ½ ham and ½ roast beef po’boy that to my dismay, came fully dressed (Sigh).
Placing your order at Poor Boy Lloyd’s can prove to be quite the adventure, due to the adorably diminutive queen of the front counter, “Mom,” who is 80+ years old and slightly hard of hearing. Our entire order was fairly large, and after I loudly shouted out what we wanted three times, I’m pretty sure the entire restaurant knew what we had decided to have for lunch. We collectively settled on the fried pickles, boudin balls, a fried shrimp po’boy with a side of french fries, the Rich Boy po’boy with a side of potato salad, and the meatloaf lunch plate with a side of mashed potatoes. All items were reasonably priced and we were assured our food would be brought to our table shortly, which it was.
We quickly decided the table favorite was the fried pickles, which had a light breading and were not overly greasy. After surveying our table landscape to locate our second appetizer, we realized we never received our order of boudin balls. The waitress swiftly apologized after she realized “Mom” had erroneously left it off our ticket, and she offered to notify the kitchen. Subsequently, she kindly warned us the boudin balls would take over 30 minutes to cook. I found this statement odd, but being a Yankee, I am anything but a boudin ball aficionado. We passed on the offer.
Without a doubt, the best part of my Rich Boy was the French bread that held him together. Like most Rich Boys, I could not deny the harsh reality…it looked good on the outside, but there just wasn’t much to speak of regarding the inside. In my opinion, the ham and roast beef were mediocre at best. The Rich Boy’s wingman, the potato salad, was also hum drum. If you have actually taken the time to read any of my previous restaurant reviews, you know I am not a fan of pickle relish, which was included in Poor Boy Lloyd’s version of this lunchtime staple side.
Surprisingly enough, the highlight of my meal came after we were finished eating. As we took our tickets to pay at a separate counter located by the exit door, I realized Poor Boy Lloyd’s has the alter ego of being a Mom and Pop convenience store. In addition to settling our bills, we had the option to purchase some dime store candy, a pack of cigarettes, and a lotto ticket. Man, who knew?! I definitely must have missed the memo…or more aptly put, I must have missed the facsimile. 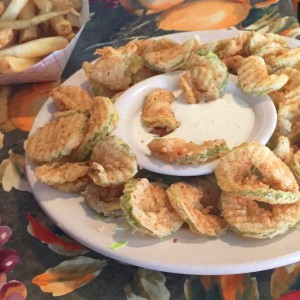 Poor Boy Lloyd’s is a Baton Rouge Institution, with all that entails. Entering the restaurant is like taking a step back in time.
Walking through the restaurant’s unprepossessing doors on Laurel Street, the wood paneling, black and white photographs, kitsch décor, and heavy wooden furniture all tell you very quickly that you have entered a family restaurant of the 1950s and 1960s – the sort of family restaurant that Guy Fieri would frequent and that your grandmother would love. (It didn’t help that an episode of the Price Is Right was airing as we entered.) The photographs and memorabilia are scenes of Baton Rouge of the 1950s and 1960s, a number of our previous governors and senators scowl and grin down at the patrons, and there are a few not-so-subtle reminders of Louisiana’s checkered history. (No checkered tablecloths, though.)
I was tasked with experiencing the daily specials, and as much as I wanted a rabbit po’boy, I went with the meatloaf special ($9), which comes with two sides. My order was taken down by “Mom”, who I can definitely see having been at the counter every day since the restaurant opened its doors. “Mom” may have taken a few tries to get my order correct, but she was nothing but sweet Southern charm. The rest of the staff was equally pleasant, although they did miss our order of boudin balls (and blamed Mom!)
The food itself was underwhelming at best, although the clear standout were our appetizer order of fried pickles. They were ever so lightly breaded, thinly sliced, and were accompanied by a creamy and tangy dipping sauce that was a perfect complement. My meatloaf, while a thickly sliced generous portion, had experienced an extraordinarily heavy-handed application of onion powder somewhere in the cooking process, as had the gravy on my mashed potatoes, and the accompanying (warm) coleslaw tasted of nothing but a hint of sweet pickle relish. My fellow diners’ po-boys were served on properly crunchy French bread, but the fillings themselves were bland and lacked any spice or seasoning at all. Overall, the food was passable at best.
I cannot say I find myself yearning for another trip back to the 1950s.

Review from our monthly “Mystery Diner” 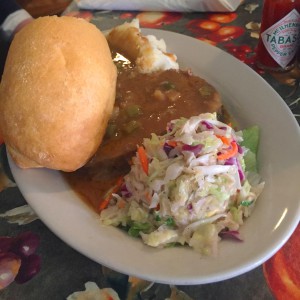 They say first impressions last a life time. An interesting sign greeted me as I entered Poor Boy Lloyd’s with Angelina and Professor Brooks. As I moved forward to scrutinize it, I was surprised to see the phrase ‘Coonass Act’ meet my line of vision. After I processed this discovery, I knew that the experience would only get more interesting.
I noticed a soft shell crab po’boy special as I approached the counter to place my order. I originally informed Angelina of my intent to order the shrimp po’boy, but an internal conflict arose as I gave more thought to my initial decision. When the moment of truth arrived, I stuck with the classic, asked for a sweet tea and anticipated the restaurant’s rendition of the shrimp sandwich.
The three of us sat down and began conversing. Little did I know that this aspect of the lunch meeting would be the most enjoyable part of my entire experience. Our waitress brought the food relatively quickly; Angelina took a photo of her appropriately named ‘Rich Boy’ sandwich, Professor Brooks took a moment to waft in the smell of his meatloaf platter, and I looked down at my cleanly cut shrimp po’boy.
My shrimp po’boy certainly wasn’t bad. However, with everything else considered, such as the blandness of Angelina’s potato salad and the overuse of onion powder in Professor Brooks’ meatloaf, Poor Boy Lloyd’s failed to make a positive lasting impression. Even considering the delicious fried pickles we ordered as an appetizer, this restaurant is stuck in 1960 in every sense you could imagine.
I give the lunch conversation and fellowship 5 gavels, but, in an unfortunate verdict for Poor Boy Lloyd’s, the food gets 1.5 gavels. I’m comforted by the fact that I will be resuming my role as the mystery diner when Angelina, Professor Brooks and I travel to New Orleans for brunch soon. Stay tuned. 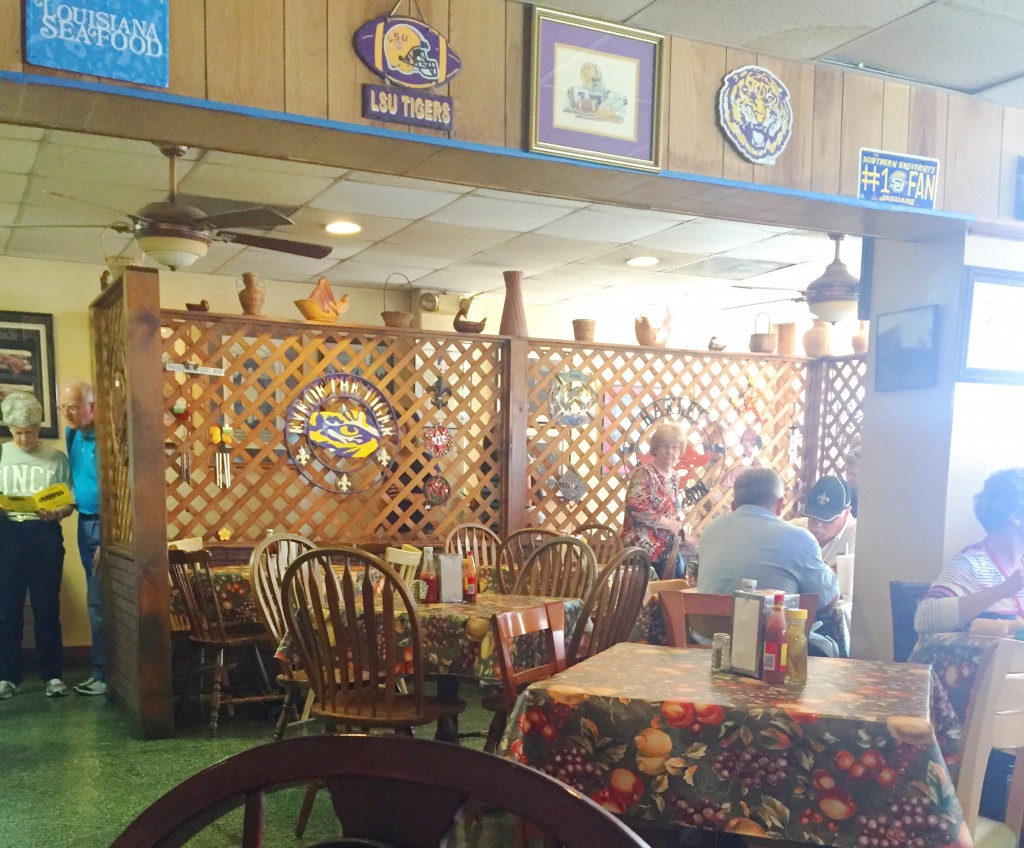