This issue of the Civilian is all about introducing the 1Ls to PMH life: the opportunities and the disappointments, the ups and the downs, the good and the ugly – and of course, the people you’ll encounter along the way. Here are a few slightly hyberbolic examples of some of the law school stereotypes that walk the halls of PMH. Enjoy! 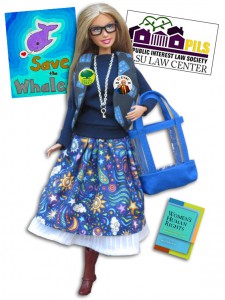 Meet “Bleeding Heart Barbie!” She is your go-to source for all things refugee-oriented/[insert current world crisis]. You’ll often find her working a bake sale raising funds for the legal representation of the homeless, OR in one of Prof. Scott Sullivan’s international law courses. She comes with a “Bernie Sanders” pin, a “Save the Whales” poster and a Women’s Human Rights Law course book. Be sure to ask her what meeting she’ll be hosting at 12:40 – THERE WILL BE PIZZA. 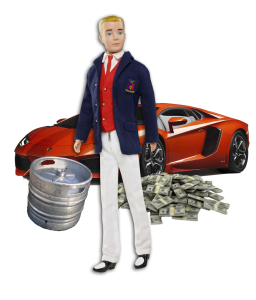 Meet “Frat Pack Ken!” If he hasn’t told you already, just know – his daddy is an attorney, which might explain his tricked-out ride and fervent support for “the Donald.” “Frat Pack Ken” is almost never sold separately. You’ll recieve four almost identical “Frat Pack Kens” for the price of one. He can often be spotted by the keg at the law center tailgate sporting Costa sunglasses and boat shoes. Don’t forget – he’s got solid gold connections. Befriend him, and you’ll land yourself a swanky job for the summer. 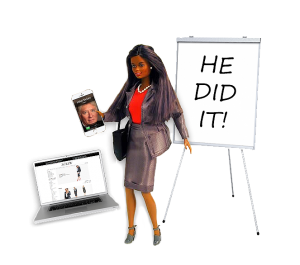 Meet “Obnoxious Advocate Barbie!” You may have already encountered her when she smacked you on the back of your head with her oversized demonstrative as she sashayed into the courtroom. She’s got the DA on speed dial – though she’s never met him. “Obnoxious Advocate Barbie” is never prepared for class – she’s been too busy preparing for fake trial. She spends most class periods perusing the web for her next killer court outfit – everyone knows the secret to winning a case is having the right accessories. But don’t underestimate her – she has a quick tongue and no mercy. 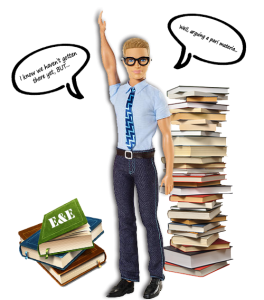 Meet “Gunner Ken!” Chances are, “Gunner Ken” has already revealed himself. You probably identified him when his arm shot up so fast he nearly ripped it out of socket – which is unfornuate given he’s carrying all of his textbooks and the corresponding E&E’s to every class. “Gunner Ken” read all his course books cover-to-cover over the summer and he’s not afraid to let you know it. You’ll find him shutting down the library at 11 PM, or in the professor’s office directly after class. You can count on “Gunner Ken” to volunteer on the days when no one else has read the assignment and for that, we are grateful. 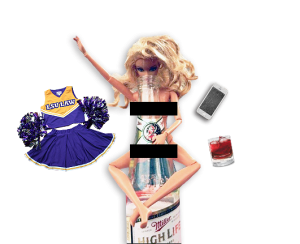 Meet “Hot Mess GIF Barbie!” You met her at the GIF – she doesn’t remember it, but you’ll never forget. When she’s not throwing back cranberry vodkas at Bogie’s, you might find her drunkenly cheering at the Barrister’s Bowl. Pay close attention to the half time dance – she’s definitely 4 beats behind everyone else. She comes with a cracked iPhone and a hangover. “Hot Mess GIF Barbie” may be a handful, but you owe it to yourself to tag along for one of her adventures before you graduate – you won’t regret it. 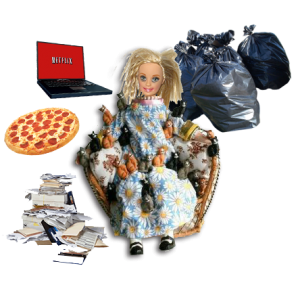 Meet “Mental Breakdown Barbie!” She LITERALLY CANNOT ANYMORE. You’ll find her frazzled in the library – but she won’t stay there long. She’ll retreat to the comfort of a pile of cats, where she can nom on Little Caesar’s and binge-watch Netflix in peace. Her school work and her garbage is piling up and getting a bit out of hand, but there’s a new season of “Orange is the New Black” on Netflix so… it can wait. (At some point in law school, we are ALL “Mental Breakdown Barbie.”) 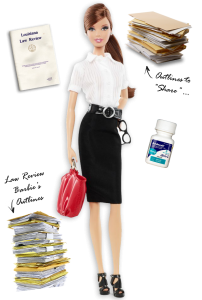 Meet “Law Review Barbie!” Has she told you how stressed she is about her law review abstract? Because she totally is, and she needs you to hear about it. “Law Review Barbie” comes with two stacks of outlines (the impeccable ones she keeps for herself and the slightly less impressive outlines to share) as well as adderall. You can find her at her very own carrel in the library or at one of the very exclusive law review parties – oh yeah, you weren’t invited. “Law Review Barbie” might get on your last nerve now, but one day you’ll be proud to say you graduated with her. 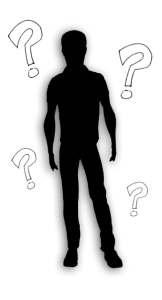 Meet “Do You Even Go Here? Ken!” He believes the “9 Absence Rule” is more of a guideline than a hard and fast rule. Don’t expect to see him in the first several weeks of school because he’s busy max-ing out his absences. “Do You Even Go Here? Ken” is a bit of a mystery package – no one knows what accessories he comes with but we do envy his ability to fly under the radar.

← Secret Lives at PMH: Joby Richard
Night at the Museum: A Curated Tour with Professor Baier →