By: The Hitchcock Blonde

Mills’ Beginners is an appropriate first movie review for several reasons: we’re beginning a new year at PMH, we’re all learning new things, and, hello, Ewan McGregor.  Mills manages to capture all that is beautiful in life, the good and the bad, and he successfully maintains a consistent whimsical vibe throughout the film, beginning to end. 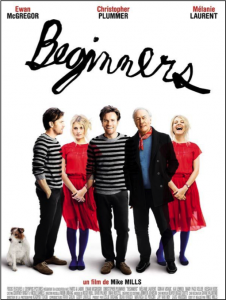 In the opening scenes, we meet Oliver, played by none other than my lover-to-be, Ewan McGregor.[1] Through Oliver’s quirky, Wes Anderson-esque flashbacks, we learn about Oliver’s childhood, his present, and how they both affect his future. Hal, played by the great Christopher Plummer, is Oliver’s deceased father. As an audience, we peer into Oliver’s life, often in shambles at times, effervescently joyful at others. We watch as Oliver and Arthur, Hal’s adorable dog, bond over their grief and attempt to understand where their lives will lead them to next. The scenes between father and son are simultaneously profound and awkward. The tongue-tied moments between them, mostly on Oliver’s part, are due to Hal’s recent coming-out. Oliver’s confusion is evident, but his acceptance and eventual understanding of his father is truly beautiful to watch unfold.

This isn’t just a story about grief; this is also a story about love. Oliver meets Anna, an elusive and sophisticated French actress, played by the charming Mélanie Laurent. Anna, too, is damaged by her past. They are both broken souls.

We slowly try to put the pieces of their lives back together side-by-side with Oliver, Arthur, and Anna: the sadness, the affection, the friendship, and the memories. Life and death, love and grief go hand-in-hand in this film, as they do in our own realities. The beauty of this film is found in the deepness of loss, the unfathomable bliss of love, and the never-ending lessons we learn from our past.

This next year will be a fascinating one: the 1L’s will learn what law school is all about, the grief, the joy, the every day battle of cold calls and stress; the 2L’s will be thankful they’re not 1L’s anymore, but they will be caught in the middle, a transition period still troubled with the occasional breakdown and endless preparation for trial ad and such; the 3L’s will still have their moments of joy and sadness, based more now in nostalgia and apprehension, as we move on to the next step in our lives, leaving behind a place where all our lives were changed for the better…whether we like it or not. We’re all beginners, no matter what the “L” you are, but don’t fret. Sometimes starting over, starting at the beginning is the best place to be.

There is nothing that pairs better with tears and life lessons than a good Riesling, and this bottle does not disappoint. Upon opening, you should note the sheer bliss of peach, honeysuckle, and pure childlike joy. Urban doesn’t stop there; wet stone, green apple, lime, and grapefruit blend together in a satisfyingly sweet and crisp sip. Don’t fear the sweetness, Urban doesn’t go overboard here; it’s just right. This wine can be found at Bet-R and Trader Joe’s for $13.

[1] Don’t act like you don’t love him. Moulin Rouge, anyone? *Faints