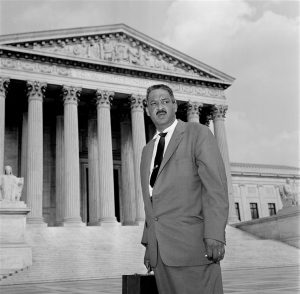 A Howard alum, among his first legal victories was Murray v. Pearson (1935), in which Marshall successfully sued the University of Maryland for denying an African American applicant admission to its law school simply on the basis of race. He eventually became a staff lawyer for the NAACP. He argued before the supreme court about various issues such as voting equality, separate but equal in universities. Decidedly his most famous case is Brown v. Board of Education of Topeka. 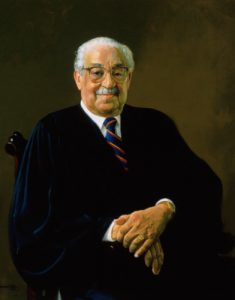 In September 1961 Marshall was nominated to the U.S. Court of Appeals for the Second Circuit by President John F. Kennedy, but opposition from Southern senators delayed his confirmation for several months. President Lyndon B. Johnson nominated him to the Supreme Court on June 13, 1967; Marshall’s appointment to the Supreme Court was confirmed (69–11) by the U.S. Senate on August 30, 1967. By the time he retired in 1991, he was known as “the Great Dissenter,” one of the last remaining liberal members of a Supreme Court dominated by a conservative majority.

“Mere access to the courthouse doors does not by itself assure a proper functioning of the adversary process.”

Check back regularly with our BLSA member blog as we will be updating it bi-weekly during the month of February with profiles of black trailblazers of the past and present. Have a wonderful Black History Month!

RSVP Here If you are questions about the event please contact lsublsa@gmail.com. We look forward to seeing you.

W.O.W – Women on Working in the Legal Field

The LSU Law Chapter of the National Black Law Student’s Association hosted an evening with some of the finest women attorneys in Louisiana. To think that women aren’t still a minority in the legal field Read more…

MARSHALL – An evening at the cinema